60 Minutes A few cooperative games from the initial flood of the genre several years ago continue to impress by transcending the basic mechanic of players Vs. game to immerse you in the theme itself. Dead of Winter can put you on the horns of a moral dilemma on par with the gritty choices made in stories like The Walking Dead.

Do you ride the horse to make it easier to travel to your destination or use it feed the helpless survivors in your colony? Do you take in children, knowing that they are mouths to feed, and raise moral or do you leave them to fend for themselves with the awkward justification that the needs of the many are more important? The game forces choices like that on you.

Dead of Winter set up

Other thematic bits add up to a wholly challenging and engaging experience. Once or twice a year I end up playing through the intro scenario because, like most coop games, you need to play exactly by the rules to have the game play properly. Our gaming group is pretty savvy and we beat the intro scenario handily. I’m going to ask that this one hit the table again soon so we can explore more of what it has to offer in the intermediate and advanced scenarios. Thanks to John for making the effort to bring it this time around. 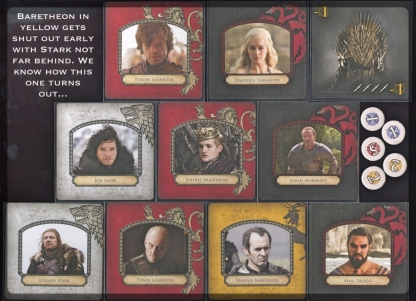 From here you can build the bottom outwards to 8 cards or place a red or black on top. Reward card in the top right. Penalty points below.

10 Minutes  This simple hand management game pits four houses from the Game of Thrones world against each other. You take turns playing one card from your randomly distributed hand of about 9 cards, building up a triangle from 8 cards across at the bottom. The trick is that some houses (red, black, yellow, grey) get shut out as you can only place a card on top if it shares at least one colour with the two cards underneath. The first person to get rid of their hand claims a random Iron Throne card that detracts penalty points from your score and is a tie breaker at the end. Everyone else gets a penalty point for each card they’re left with. You play as many rounds as there are players.

Duncan and Seth picked up right away that Fantasy Flight pasted on the theme as they squeeze the most from their IP Game of Thrones license. The game underneath was designed by the mathematician and game creation machine Reiner Knizia. True to form, he’s created an interesting puzzle game that has small elements of luck to add some surprise (your hand, some Iron Throne cards are better than others) but is fundamentally dry and mechanical. We only played one hand. I think that says it all. I have to say though, there is fun to be had by slapping down Tyrion Lannister to cut the Stark line once and for all.

20 Minutes This game has a charm. Chasing the detested Doctor Lucky around the mansion trying to hide from view long enough to kill him while everyone else is doing the same is fun. The copy John brought was the 20th anniversary edition so it’s created its own legacy. I feel it would be at its best at either a family game night or to introduce people to games beyond Sorry and Monopoly.

It does, however, have a surprising depth to it as you can whittle down opponents while building your own strength through stealing turns at the right time. This tactical element is almost completely counteracted by the randomness of the cards that you draw. The right card at the right time can gift a win, or at least thwart an opponent who should have won. Considering it was initially published by Cheapass Games as a print and play game it’s done well for itself. A life-sized version where you actually walk around the board trying to kill Lucky is a big hit at the CanGames convention every year.

Yeah, I feel your pain.

2 Hours  It’ll come as no surprise to hear that the game kicked our butts again and that I stay enamoured with it. It’s got that old school game feel where you go through once or twice almost as scouting missions knowing you’re going to lose. Maybe, just maybe, on the third or fourth go you might have enough intel to get it right and win. Although, this game’s clever enough to move things around. That secret passage you found in the library? Not there anymore. It’s almost like an Ancient One is toying with you…

After a couple more plays through I’ll do a complete write up. We’re only just getting started on this one so far.