Roll Call summarizes the past week’s gaming exploits, and who was doing the exploiting. This past two weeks had 6 gaming sessions. The highlights are reported here. Mansions of Madness spoilers at the very bottom of the post below the poll.  Don’t forget Seth’s suggested poll about your favourite zombie game near the bottom.

20 Minutes, 3 Players, Time includes teaching the two newbies I played with  Lay out a line of 12 nobles per day for each of the three days of the French Revolution. As rival executioners of the people, before the mandatory collection of the nobel’s head at the front of the line, you can use one of your five action cards to rearrange the line and screw your opponent to best advantage. Most points worth of nobles at the end of three days wins.

All heads are not created equal

Light and fluffy, this game is easy to teach, plays well with between 2 and 6 players, people can join and leave mid-game without too much fuss, and nobody gets eliminated before the final scores are tallied. A near perfect lunchtime club game if it wasn’t for the fact you’re cutting off heads all the time. You can always tell the kids you’re ‘saving’ the nobel at the front of the line. Guillotine will, however, not satisfy the rivet or bean counters in your game group who want to be able to clearly calculate and plot a course to victory. There’s too much luck in how the nobles are dealt out and which action cards you get to make this a real strategy game. Strictly pop and pretzels but tasty nonetheless.

60 Minutes  After playing the first scenario of Dead of Winter again last game night, we were able to get in a more advanced scenario this time around.  My opinion remains positive and everyone seemed to enjoy it.  We lost quite badly as we were about half finished our overall objective when we lost a survivor (mine), lost a morale, and lost the game. However, once again, the game delivered a really fun and tense cooperative experience with even more gritty choices than last time. Spoiler, this time we didn’t turn the horse into food (but probably should have).

The roll that lost us the game 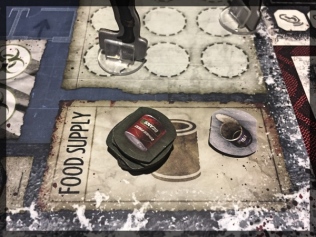 Starvation in the food supply

I’d recommend this game along with the dice version of Pandemic: The Cure  as easy ways to turn new gamers on to cooperative games or cater to groups that don’t like head-to-head competition. Dead of Winter checks all the boxes: easy to teach, predictable play time, limited down time even with 4 or 5 players. With an expansion out now and the ability to pick it up cheaply from on-line retailers or the odd lucky find at a Geek Garage Sale, it is highly recommended.

Warning, Mansion of Madness spoilers below the poll. It shows the first Cycle of Eternity adventure final game board set up, but that’s it.

2.5 Hours  We broke out Mansions of Madness on Family day Monday. It was the first time I’ve played with my wife and daughter. They caught on quick and we ended up winning the opening adventure, although two of us never made it out of the mansion. It was interesting to get a take on the game from recreational gamers (as opposed to diehards).

solving a mystery. The app didn’t get in the way at all and, as before, allowed me to just teach and play the game without any bookkeeping. There were brief moments of frustration with having only two actions per turn. It seems unnatural to double move to get to a door, then pause for a mythos phase before opening it. We quickly got over that and into the rhythm of the game.

The final verdict is that everyone wants to play again. That says it all.

← How to Build a Successful Games Club: High School Edition, Part 3
The Clarion Call of Cthulhu: How I Learned to Love the Beast, Part 1 →

One Comment on “ Roll Call: Guillotine, Dead of Winter, Mansions of Madness ”