The Cthulhu mythos created by H.P. Lovecraft has far outlived its creator. In addition to a loyal readership, the canon stories have also gathered an equally enthusiastic gaming audience. These gamer initiates have summoned Cthulhu and its kind from their slumber through untended gates to lie glistening on gaming tables across this world. And if you truly believe, across tables in other worlds as well. Asking “why” the Ancient Ones have chosen to be present in this world at this time is pointless. All we can attempt is an explanation of why Lovecraft is compelling and why so many play in the ooze of Lovecraft’s mythos, and enjoy every minute of it.

The Lovecraft mythos and stories are as timeless and compelling as other classics of the 1930s. While the

original writing can seem antiquated and will not appear on a feminist or rights activitst’s reading list, Lovecraft’s Cthulhu, Robert E. Howard’s Conan, and Edgar Rice Burroughs’ Tarzan continue to be reimagined by successive generations of contemporary media. Eighty years later, the core ideas and characters of these classics are familiar enough to recognize yet strange enough to be perpetually novel.

Lovecraft, however, differs from his contemporaries in two important respects. First, with Tarzan and Conan it is the main protagonist that captures the imagination, elicits both sympathy and admiration, and drives the story onward. Tarzan’s noble savage is drawn in sharp contrast to the corrupting influence of encroaching civilization. Conan drags us along on adventures, cleaving left and right, as his mighty thews propel him ever higher towards leadership and a throne: two chains Conan knows can shackle even the fiercest warrior. For both, stories end watching an ever more distant untamed mass of hair falling over a muscular back, ever turned on civilization.

By contrast, Lovecraft’s ensemble cast of human protagonists are merely a disposable lens to focus on an alien and unknowable void. Characters regularly meet a horrific end after significant torment at the whim of a pantheon of entities. The innate morality of Conan and Tarzan are nowhere to be found in Lovecraft. The Ancient Ones always win but, really, were they ever aware there was a fight? Ancient Ones corrupt both the proudest and basest of humanity’s words and deeds until they are indistinguishable. In the end, only the mad and those about to become so can tell the difference, and wish they couldn’t. You don’t conquer and hear the lamentations of your enemies in Lovecraft’s world. If you’re fortunate you might just survive long enough to tell the tale.

Find what you’re looking for?

Read this passage, out loud, friend…

They can’t have gone far.

The second significant way Lovecraft differs from Howard and Burroughs is the use of setting. Conan and Tarzan propel us through mysterious realms and their novelties. How they navigate their strange but familiar worlds is a key part of the charm. Writing in the first person, Lovecraft gives us a narrower more constrained view that hints at the peripheries and creatures and dimensions that, surely, cannot exist. The motivations of Tarzan and Conan and the people that inhabit their worlds are familiar to us.

In Chtulhu’s world, the mythos and its denizens are the setting, mood, and antagonist all at the same time. Deliberately, the desires, motivations, methods, and appearance of the malevolent forces that create and manipulate Lovecraft’s settings are completely foreign and “unknowable.”  Except, of course, in that brief moment of comprehension before you are driven mad by correlating all the contents of your own mind, and the final realization that what should not be, is… 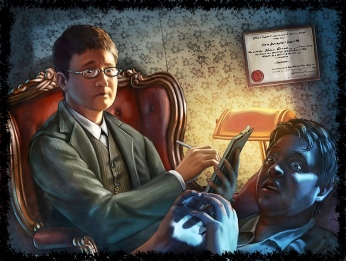 They seemed so, so… real.

Don’t look in the shadows. They might look back.

…that should not be.

Lovecraft has taken 1920s and 30s hard-boiled detective fiction and put a disturbing twist on the murder mystery genre. He’s left a trail of otherworldly breadcrumbs leading to strange disappearances, cultists opening gates to other 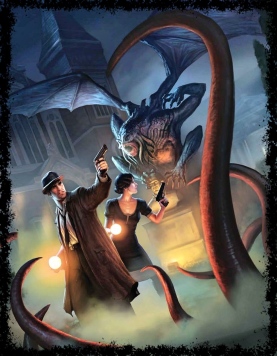 Other Worlds, and finally an encounter with a manifestation of an Ancient One. Whether you encounter Star Spawn, The King in Yellow, Deep Ones, The Black Goat of the Woods, or other unnamable tentacled horrors, previous fears about demons and devils become familiar and comforting in comparison. The unfathomable motivations of creatures that might not even know we exist drive the plot. They are often unaware that the briefest flicker of their attention can flood our world with their nightmarish progeny and the ultimate destruction they portend.

The Lovecraft mythos gives us the role of investigators tasked with peeling back the familiar layers of our world to get a glimpse of other dimensions. Like the characters in his stories we sometimes learn too much for our own good and our characters go insane. The Necronomicon and other profane and arcane texts are hidden in Arkham’s libraries, graveyards, or have been under our beds all along, waiting to be discovered so they can disgorge their secrets. It is this sense of mystery and the thrill of peeking at otherworldly creatures through our fingers that compels us to play in Cthulhu’s world. If we leave feeling slightly disturbed because our investigations reveal a malevolence that defies logic then I’d say Lovecraft continues to do his job.

In the next installment we’ll look at why the Lovecraft mythos is so ripe for RPG, cooperative, head-to-head, and just about every other kind of gaming. Far more so than the worlds of Conan and Tarzan, the mythos is incredibly fertile soil for the gamer. Some might even say Cthulhu wanted it that way…

5 Comments on “The Clarion Call of Cthulhu: How I Learned to Love the Beast, Part 1”