Roll Call summarizes the past week’s gaming exploits, and who was doing the exploiting. With a week-long holiday there was a ton of gaming this past week or two. Excellent!  So much to report this one earns a Friday post all to itself. Spoilers for Mansions of Madness: Shattered Bonds at the bottom of the post.

Spyfall (2014, BGG 7.1)  30 Minutes  How to play: A tongue in cheek social deduction game that drops one random player as a spy into a location known only to the other non-spy players. Taking turns, players ask each other a question to try to discover who’s the spy or, in the case of the spy, trying to fit in long enough to figure out which of the 30 preset locations they’ve landed in. The spy can, at any time during the round, reveal their identity and guess the location. If they’re right, they win.  Otherwise, if the spy isn’t accused unanimously during a round, after 8 minutes of questions, the round ends and players take turns accusing one player as a spy. If the non-spy players ever accuse and collectively vote incorrectly the spy wins. If, after everyone has had a chance to accuse, there’s no unanimous vote the spy wins.

Some of the 30 locations found in the base game.

An example location, spy, and card back which all cards share.

The Verdict: Each round takes 30 seconds to set up, eight minutes to play, and a couple of minutes if time runs out to accuse people at the end. Everyone was totally engaged the whole time and there’s no player elimination. The game’s also playable with 3 to 8 people so it makes for an ideal starter or finisher as a buffer either end of a gaming session. Our group had fun with it but hard-core strategy game groups may be put off by the ‘extrovert’ factor as you need to be able to lie, deflect, and cajole with good grace. Apart from the single card each player gets and a collage of locations in the middle of the table there are no other pieces. It’s only as good a game as people make it without having intricate mechanics or playing pieces to fall back on. We’ll play this one again I’m sure. It’s was fun. 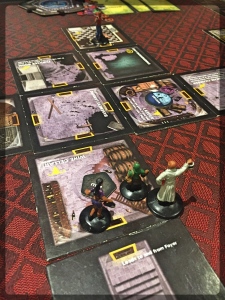 mess. Locked in the “House on the Hill” players have to explore, drawing the rooms at random as they go. Every imaginable horror trope jumps out of, crawls from, or descends into rooms such as the laboratory, library, furnace room, and creaky hallway. You get the idea.

Exploring brings items as rewards but can also reveal rooms that have an “omen” attached to them which trigger events like “…your hand is no longer your own. It attacks you.” and associated choices. Seth chose to just cut it off. It was later returned when he sent his item “thieves gloves” to the discard pile with the hand still in one of the gloves. There’s plenty of room for making the most of the game’s many schlock horror moments. Betrayal is at its best if you play up that aspect.

Once enough omens are revealed to tip the scales the “haunt” begins. With the Widow’s Walk expansion adding numerous new rooms and 50 new haunts to the original 50 the game’s other main strength of replayability is made even stronger. Because even the same haunt can play out totally different depending on random map set up or player location you will never, ever run out of cinematic moments as you explore every horror trope known to man, or beast, or undead. One criticism that John, a Betrayal veteran, has is that the expansion does not add any new characters to play with. The game ends when the traitor in the group and his inevitable betrayal complete the traitor victory condition in each unique haunt or the other players reach the survivor’s haunt condition first.

We revealed A LOT of house!

The Verdict: The game’s main drawback for me is a combination of the radically variable playtime from haunt to haunt and the fact that players can get eliminated relatively early in the game. There’s not much fun to be had by a player sitting out 30 minutes or more of a game while watching others bring about a slow but inevitable conclusion. While the game’s fun I think people would go home disappointed if Betrayal dragged on, as it has the potential to do, and was the only game that hit the table that night.

Full credit to Seth Wilson who single-handedly created all the scenery and wonderful looking models in this section of the post. He was also kind enough to teach me how to play and supply all the rules. A friend in need’s a friend indeed. A friend with games is even better!

Scenario set up. The police car on the right is the starting point. At least two of the police inside it have to run the moonshiner gauntlet and escape off the left side of the board.

It’s an interesting and solid ruleset that fits the prohibition era battle between small groups of police, moonshiner, prohibition agents, and gangsters.

What Went Down Smooth: With less than ten models aside and a unique card based activation system which constantly creates interesting choices, this is an excellent skirmish game. Most aspects of the rules play up the prohibition era theme – the special cards often reference some of the best moments of movies set in the prohibition era. Quoting lines at opportune moments during the game came naturally and adds to the fun. The ability to do campaign play on a stylized map of Chicago as you improve the abilities and stats of your individual characters is a baked in bonus.

Rough Like Young Stump Whiskey: Using both a card deck and 10 and 20 sided dice the game can be ‘swingy’ as luck favours or abandons you. Using D20 for damage resolution with only, say, 20 rolls during the game means the even spread of results you’d get off a D6 never had a chance to moderate results. There are many mitigating factors you can bring to bear but going in recognize that many D20 rolls are essentially a 50% chance that you’ll wound him and 10% chance to ‘put your man down’ and kill him outright. I’m always wary of games that can hinge on a single D20 roll. This one can. 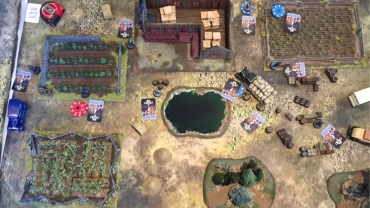 The Verdict: With the aesthetic presence brought to the table by Seth’s models and scenery this was a really fun ‘beer and pretzels’ game that I look forward to playing again soon.

Warning, Mansion of Madness: Shattered Bonds spoilers below the break.

120 Minutes Some consistently lucky die rolls and fortunate choices allowed us to beat this “Level 5” difficulty adventure after only one previous play through as a scouting mission. The puzzle aspect of adventuring was ramped up as we needed to use actions to shepherd hapless civilians around the mansion with us so they were never left alone to be devoured by the Chthulhuesque Star Spawn that hunted them during the nightly Mythos Phase. We also needed to find enough pieces to remake the fragmented idol that released the evil and gives the adventure its Shattered Bonds title.

The most difficult scenario from the starter box. 5 Elder Signs even! 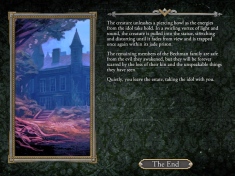 Can’t believe we actually beat this one!

Face to face with a Star Spawn…

All but one room revealed.

The game’s strengths – the puzzles, thematic text, clue finding, story line – continue to shine through making this victory pretty sweet but no more or less creepy or enjoyable than the previous loss. The closing screen alludes to the fact that getting out alive is the real reward. The fact that we’ve also transported into the wider world the reconstructed relic that released the monster in the first place is an entirely thematic way to “win”. Loved this adventure!

And that’s about all the gaming I could pack into one excellent week. Any and all thoughts and comments welcome below.

← WWII Africa Campaign Map: Resin Casting and Prep for Envirotex Light
The Clarion Call of Cthulhu: How I Learned to Love the Beast, Part 2 →