Roll Call: Kemet, Kessel Run Games and Mansions of Madness: What Lies Within

Roll Call summarizes recent gaming exploits, and who was doing the exploiting. Kessel Run gaming store, Kemet, and Mansions of Madness: What Lies Within all hit the table in this special “Was it worth it?” edition of Roll Call.

Kemet (2012, BGG 7.5) 2 Hours  Kemet is an Egyptian fantasy themed game with a lot of moving parts. At its heart is a ‘Euro’ style worker placement game where you build up resources, place workers, and take control of key areas, while trying to stop opponents from doing the same. With unavoidable direct player conflict, some very clever mechanics, and a beautiful overlay of colourful cards, pieces, and tokens,  Kemet becomes much more than an average Euro.

The game has fantastic production values. Every card, token, tile, pyramid, and piece looks and feels great. In board game terms it’s a work of art with a stylish red, blue, white, and gold colour scheme that delivers key details through colourful and clear pictures, icons, and text. In fact, the artwork is so good it actually streamlines what otherwise might result in rules and info overload. Great art makes this complex game seem straightforward and intuitive as well as providing great eye candy everywhere you look. 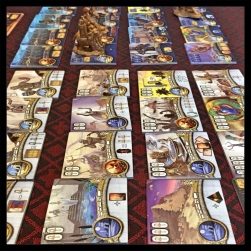 Power tiles, yours for the taking.

player interaction. Many worker placement game systems result in staring at your player board on the table in front of you for most of the game. Not so in Kemet. To win you have to fight. Heck, you even get the chance to send your giant Scorpion army against your buddy’s Sphinx or War Elephant! There is much managing of your player cards in front of you – empire building through your tableau is a rewarding pursuit in Kemet – but there’s also a lot of table banter. Mostly along the lines of, “He’s getting a lead. Why don’t you attack him!?!”

Kemet has clever mechanics that allow for complexity without constant referral to the rulebook. For example, upgrading one of your three pyramids costs the level you’re upgrading to – 1 through 4. You’re allowed to buy red, blue, or white power tiles up to the level of your red, blue, or white pyramid – again 1 through 4. The power tiles cost (you guessed it) 1 through 4 depending on their level. Many games achieve balance in game play through clunky systems like points awarded on graduated scales and using counterintuitive numbering systems. Apart from very few special rules, Kemet’s core rules for buying, building, fighting, and gaining victory points all work intuitively and in a the way you’d expect. However:

Kemet is not a simple game.

Duncan aptly described it as, “Busy.” What it makes up for in a streamlined ruleset is offset by 48 power tiles. There are only a couple of duplicates so the permutations of power tiles and what they’ll do when used in tandem with other tiles would take at least 10 plays in order to grasp. Even though this was our first time playing, however, it felt manageable to keep track of the tiles in your own play area and how and when to use them. In fact, the real heart of Kemet that keeps pumping replayability and novelty into the game is how efficient and crafty you can be with your power tile combos.  You can make a plan and follow through most of the time.

Power Tiles: 48 of them. White gives you resources and cost reductions, Blue gives defense and units, Red is all about fighting and movement.

But here’s the rub. What threw us off was that there were four other players with equally complex tile combos at work. Unless you play a lot, you’ll need to be comfortable with other players setting up combos that you won’t see coming. Because there’s a lot of confrontation in Kemet those combos are going to ruin some of your best laid plans. For gamers who like to be able to work out all the factors and strategies in advance Kemet may be frustrating for this reason. John navigated things well with a convincing but close fought win by keeping his own house and engine in order. 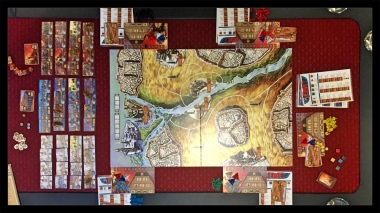 Personally, I found the difficulty of keeping track of all your opponent’s power tiles the single thing that might be considered ‘random’ or ‘clunky’. Two things a ‘Euro’ game should not be! The only random luck is in which Divine Intervention card you get each turn and, frankly, these balance out over a few turns. There are no dice rolls in Kemet and the game is perfectly balanced from the very start with the cleverly designed board starting everyone equidistant from both key bonus territories and each other.

Was it worth it? Kemet is expensive enough to be an investment that must pay off multiple times in order to justify the purchase. The components and artwork are good value. The clever and intuitive core mechanics are always solid and often elegant. The difficulty of keeping track of other player’s power tiles is the only real negative. For a game that plays well with 3, 4, or 5, takes a reliable two hours or less, has no player elimination, keeps everyone on their toes the whole time, and seems to end at the peak of the action instead of dragging on – if I can get it on the table a few times a year: Yes, it was worth it.

Thanks to Boris at Twice the Fun Games in Kemptville, ON for getting me a copy of Kemet when it was playing hard to get.

The first thing you notice when you walk in the store is the people who run it LOVE games and the fantasy, sci-fi, and history that inspire them.

Tell me you don’t want to offer someone the blue or the red pill while sitting in that chair.

There’s Star Wars – and loads of other sci-fi and fantasy – stuff everywhere! With a major

gathering of Magic players the Thursday night of the Easter weekend we found ourselves without our usual table in the main area and rented the Skywalker Room for a couple of hours instead. There’s a bigger Mordor room available as well. The room rental was worth it, particularly if you’ve got a bigger group to spread the cost.

Magic is certainly a major part of Kessel Run’s business but they also stock a small but well chosen selection of miniature ranges as well as a goodly number of board games. We’ve picked up quite a number of games and accessories there.

Fantasy Flight released a pay-to-play expansion for the tablet app that runs Mansions of Madness, 2nd Ed. Having beaten (or been beaten into submission by) all the core game adventures I sprung $5.99 for the What Lies Within download. We finally beat it (mostly) on our third time through. Six hours of entertainment for a couple of people with replays available for the family when we get around to this one. Not bad at all. It was worth it.

SPOILERS, read on at your own peril. It’s another great adventure that delivers a challenging, thematic, and downright spooky romp through another haunted mansion. You have to collect items to open a sealed door, reassemble a broken statue, then perform a ritual to summon the malevolent entity back into the assembled statue totem.  I’m always impressed how the game can consistently deliver a tense experience where success moves just within and then out of reach several times each game. Each ‘win’ always comes by the skin of your teeth and feels like a real victory.

Cops won’t touch this one, time for an investigation! 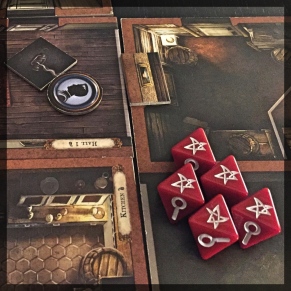 The luckiest of all die rolls.

The end of this story doesn’t disappoint either. We enter the mansion with confidence, assured we can succeed where the police have failed. We leave in handcuffs having become the new vessel of the otherworldly creature with a story too wild to believe and a group of cultists on our trail, only too willing to release their master by shattering its new vessel… you! Some accuse Fantasy Flight Games of watering down the dark nature of H.P. Lovecraft’s original source material. I think Lovecraft would have approved of the way this one ended. Read on if you dare.

All comments and questions welcome!