Every year on the Victoria Day long weekend in May gamers from Ottawa, Eastern Ontario, and beyond gather for three days of gaming at the CanGames convention. At 40 years old this ‘con’ caters primarily to RPG, miniatures, and wargamers; however, there’s plenty on offer for kids and board gamers as well. Come take a look for yourself. 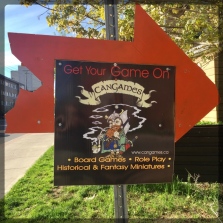 The chance to play large-scale games, often with up to 12 players, on tables and terrain that are often homemade with rules that are written, created, and play tested for conventions means you’ll get an experience unique to CanGames. You’ll often see things here that you won’t see anywhere else including some dealers in the market. It does require, however, some judicious choices to make your unique experience a positive one.

Getting set up Saturday AM 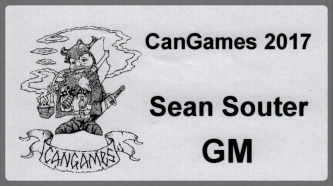 The theme for this year was “Taking Flight”

There are always excellent games to play at CanGames – RPGs, miniature games, or otherwise. Most GMs spend a lot of time playtesting their games so that they allow for larger groups of people to stay engaged, busy, and include plot twists and other very creative ways to spin a yarn. It is not unusual, at all, to hear mass shouts, cheers, and boos from across the gaming floor once the games get into full swing. An experienced GM who is passionate about their game can take their groups on a really fun ride. Below are four great looking games that players enjoyed to illustrate the best CanGames has to offer.

Flight from the Apocalypse by Rex Brynen, 8 players, wins on serious eye candy. It has a nice 8 player limit on a big board and a driving narrative summed up in the tagline, “Eight survivors in a zombie-infested city, One helicopter, Four seats.” Who wouldn’t want to play this one? 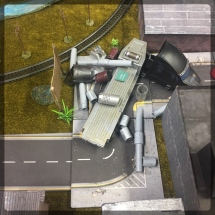 So many cool things on the board

8 survivors, 4 seats on that chopper 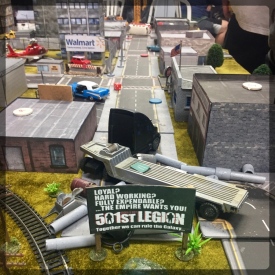 See the ComicCon post for more on the 501st Legion

A whole city block to play in

Bagotrix Rides Out by Duncan Allen, 6 players. This mass battle game pits the Romans against the Ancient Britons and had a lot going for it. Each year GM Duncan continues the battle or theme from the previous year. In addition to this continuity and a pile of good-looking painted miniatures arrayed across a fine playing surface, Duncan backed up a scenario of his own devising with a tried and tested set of rules.  Warlord Game’s Hail Caesar ruleset comes with the baked in bonus of being thoroughly playtested. I have, unfortunately, played games at CanGames where it was obvious the game I was playing was the playtest. Kudos to GMs like Duncan who make sure the rules that will govern three or four hours of their player’s lives work properly and know those rules inside out. 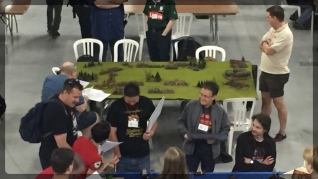 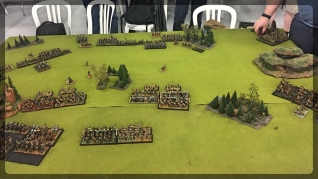 Axis and Allies: Global 1940 by Lionel Scott-Harston, 6 players.  I had a great chat with Lionel who ran a massive version of Axis and Allies, using both the Europe and Pacific 1940 sets. The result was a spectacle that brought back fond memories of late night A&A sessions with Ric and Duff in high school. Lionel was a real enthusiast and used the flexibility of the CanGames format to put on a game that you wouldn’t see anywhere else outside a dedicated A&A group. He was also good enough to let me have a look at the now rare 6 player special anniversary edition. Sometimes the best moments at CanGames can be enjoying and playing with other gamer’s toys! 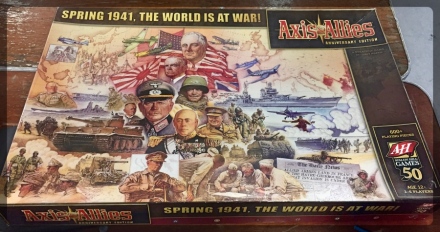 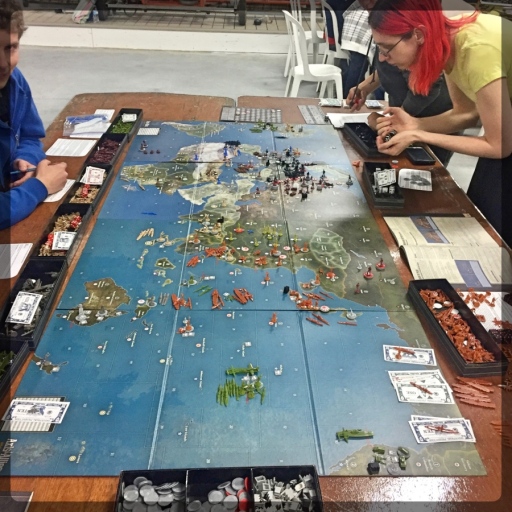 1757, Siege of Fort William Henry by Ed Burley, 4 players. If this looks familiar that’s because this game is a recreation of the siege from Last of the Mohicans. The GM’s obviously got a lot of painting and scenery talent. For me, this is the best of all worlds: a cinematic moment based in history about which you get to ask and answer the question: What would you have done? With a small player count, word was that you needed to register for this one early. That’s what I’ll be doing next year! 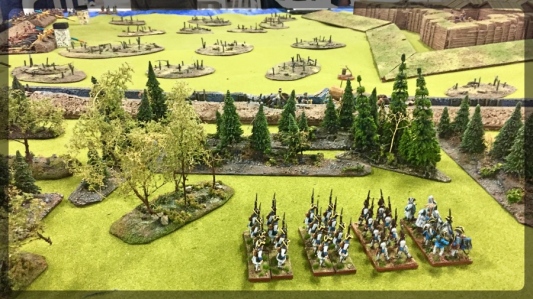 The Market is always fun to poke around. The best part for me is the CanGames flea market which opened at 10 AM this year. This is where everybody sells off the gaming gear they bought but don’t use or to clear space for new games. I was busy with a game but Seth was good enough to scoop a gently used copy of Small World for me for $15. A steal!

The Food! The food at the venue itself has come a long way and there’s good food and drink to be had on-site at reasonable prices. What I look forward to, however, is eating at one of the many, many restaurants in Chinatown, less than five minutes walk away. We ended up having dim sum for dinner on Friday and then again for lunch on Saturday at Oriental Chu Shing Restaurant. Great!

Two things before moving on. First, there were A LOT more games on the go and many of them looked great. There just isn’t room to do them all justice here.  Also, gamers seem to fall into two of three categories: RPG, miniatures, board games. For me it’s board and miniature games so you’ll have to forgive me for not having much to say about the RPG games on offer. Leave your thoughts in the comments if you’ve got something to say one way or another about CanGames RPGs and other games played.

CanGames isn’t all fun and games; careful choosing of where and with who you spend your time is key. For me personally I find that the large number of 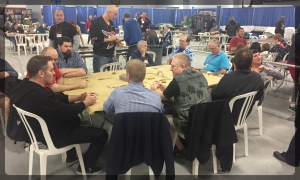 players crammed into one game can minimize the time each player gets to actually do something, particularly when you are dependent on a GM in order to clarify rules and make judgement calls. In past years I’ve found myself stuck in what should be a 60 minute game turning into a 240 minute marathon. This is especially trying because, often, these games don’t have player elimination so you have to stick it out. At its worst, this can mean doing 15 seconds worth of action every 10 minutes or so while players who are in the thick of things play merrily along.

Unlike this six-player Frostgrave game that comes with a rock-solid rule set, some homegrown games suffer from a lack of playtesting. For me in the past, this has created a situation where you’re always down but never out (even when you really wish you were!). I’ve been on both sides: once where my character was twice as powerful as the next and again where other characters were clearly superior from the get go. The arbitrary nature of these situations really puts me off, partially because they would be so easy to fix if a GM pays attention and makes adjustments on the fly or between sessions.

It was telling that I was able to have full conversations with people who were wandering around, away from their tables, because their next turn was at least five minutes away and they needed a break. Such is the nature of some beasts.

Then there’s that guy. You know, the guy you’re really hoping doesn’t end up in your game because they smell, are rude, take 10 minutes to decide anything, and/or argue with the GM about stupid stuff. Luckily, there’re only a few of that guy wandering around the con at any given time and, frankly, we are adults who willingly sign up to play board and miniature games on what is usually the first real summer weekend of the year. Sometimes, you’re going to get stuck with that guy, and if you’re really unlucky, his friends too.

When you get a combination of that guy, too many players, and too flaky a GM and set of rules you can be in for a very long session indeed!

Two years ago I ran into a trifecta of a poorly tested game, 12 players, and several versions of that guy which lasted over 4 hours. Last year I didn’t sign up for anything. 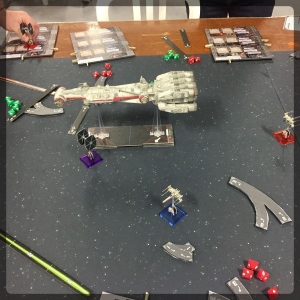 This year my solution was to run a game of my own which, dammit, would be playtested, fun, and not four hours. Seth and I ran Star Wars X-Wing as a participation game that people at loose ends could drop in and out of for 20 minutes at a time. I’m still convinced this style of game is needed. It was a good idea that simply didn’t work. The game itself was playtested and we knew the rules inside out but had only four players. This was a learning experience and I’ll do a couple of things differently when I run the same game next year. First and foremost, I’ll do advance sign up to make sure I get enough players. Second, I’ll put together three linked scenarios that players can work their way through to provide a story arc to the games.

Despite setbacks my faith has been restored and I’ll not only run a game but sign up for several next year, well in advance. Seeing how much effort goes into putting on games and the great job some GMs do makes me want to participate again. But this time I’ll have done my homework. Along with some good memories and learning a lot about running games I’ve got my CanGames program. It’s very carefully annotated and highlighted with the names of good GMs and interesting games. By Being picky and staying to lower player count games I’m already looking forward to having a better con next year.

Any tricks or suggestions about how to make sure you have a good con? Feel free to comment below.

← Ottawa ComicCon 2017: Worth the Price of Admission?
Resin Runs Through It: Building a Wargames River →