Resin Runs Through It: Building a Wargames River

Terrain plays a dual role in wargaming. It creates a battlefield with realistic obstacles and tactical challenges while also making the playing surface look good. Terrain is what distinguishes a 3D historical battlefield from a board game played on a uniform flat surface. Buildings, trees, and fences are easy to create in 3D because they stick up above the board surface. This tutorial will focus on making a wargames river that looks 3D without having to dig a river bed into your gaming table.

We’ll be using Envirotex Lite to give us a realistic looking water surface. It’s a clear two

part resin. Once the resin and hardener are mixed properly in equal amounts it pours nicely, levels like water, and then goes rock hard and crystal clear in a day giving you very realistic water features. Between bottle and gaming table, however, a lot can go wrong. Here’s a walk-through of how to get the most out of Envirotex Lite while avoiding some of the pitfalls.

Resin Runs Through It!

be water tight. If water can seep through so can Envirotex. You need a nice tight seal from both the bottom surface and your dam or walls around the outside. It may look fine after you pour but unless your preparation is meticulous you’ll come back the next day to find it set rock hard all over your workbench and floor. Don’t ask me how I know that!

For the river bottom I cut out straight, T-junction and 45° and 90° curves from cheap artist painting boards. They are completely impermeable to water, thin and light, designed to accept all kinds of paint, don’t warp, and easy to cut with a jigsaw to get the right shape and an edge that tapers down to meet your gaming table. Last I sealed the visible board edge with PVA glue and brown paint. This edge will be further hidden with grass, gravel, and other terrain items.

I cast the river bank using Woodland Scenics Creek Bank Mould and Hydrocal casting medium. I used good waterproof construction adhesive to attach the bank pieces to the edges of the river bed. The adhesive was rubbery so it flexes a little and seals completely under the river edges. Between the end sections of riverbank I used paintable silicone caulking liberally applied with my finger to work it into the gaps and seal everything up tight. 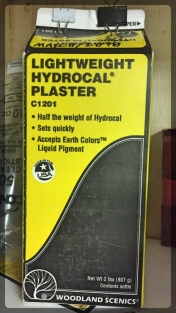 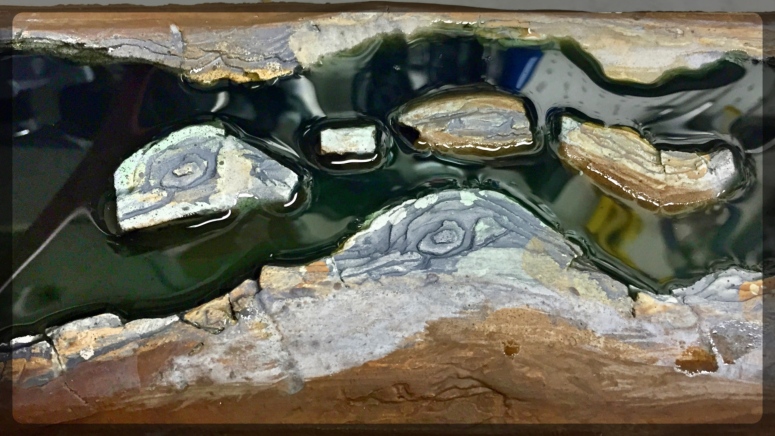 Finished Product, Holding Back the Tide

Using an airbrush on the pre-primed surface, I went for a dark green and murky brown look; darker in the middle, lighter on the edges. I also tinted the Envirotex with green and black ink to increase the opacity. More on that later. The plaster river edges were then washed repeatedly (see the Woodland Scenic video here) with different colour mixtures and sealed using brushed on Future Floor Polish 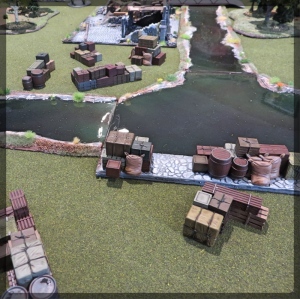 which the open-pored plaster soaked up like a sponge. Something like diluted Modge-Podge mat finish would work even better. The final step was mixing a small batch of Envirotex and painting a very thin layer into each and every nook and cranny.

When the whole lot was sealed, set, and dry I airbrushed acrylic Testor’s Dull Cote to knock the shine off everything and give a uniform sheen. I wasn’t sure if a spray can mat varnish would interfere with Envirotex so I stuck with acrylic and what I know. I’m not sure If I needed to go to such lengths to make this work but I’ve learned with Envirotex you’ll pay dearly in wasted material, wrecked groundwork, time, and money if you cut corners.

Instead of damming up each and every end, I laid all the pieces end-to-end and sealed them together with a little silicon caulking. This way there were only five end pieces that needed to be blocked with popsicle sticks and caulking. Using my trusty bubble level I used blu-tack, toothpicks as shims, and finally gobs of hot glue to lock everything leveled and in place.

If you follow Envirotex’s specific instructions to the letter everything will work just fine.

You’ll need large plastic cups – clear ones work best – and mark several in advance so you can get an exact 1:1 ratio with several back up cups just in case. Mix the heck out of it with oversize popsicle sticks and then (and don’t skip this step) transfer it all to a new cup, add your inks for tinting, and mix it all really well again. I put the mixture into my vacuum chamber for a couple of minutes to suck all the air and bubbles out but you can get away without this step. Just be prepared for some serious bubble popping later as your mixing will have added plenty of air bubbles.

By trial and error the week before I had tested very small amounts of Envirotex with green and black ink to get the right ratio. As the layer on top of the river surface was very thin the tint had to be very dark. In retrospect, I overdid it a little and the river turned out a bit darker than intended but I’m OK with the overall look. 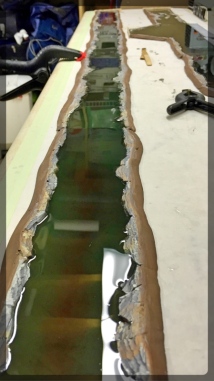 The moment of truth. Proper calculations would’ve allowed a continuous smooth coat from a single pour. I messed this up and had to do up another batch. No big deal, although you can see some swirls in the layer where the two batches were poured and mixed into each other. In theory, Envirotex should flow on a level surface evenly from one end to the other. In practice, it worked!

Small slices to later make bends in the river

The inevitable leak! Despite the best laid plans I came back an hour after pouring and spreading the Envirotex across the whole surface to find Envirotex seeping through a crack. I stuffed a little caulking into the crack – luckily it was a small one – and did a very small re-pour on that section an hour later. It held up and luckily the seepage underneath was pretty easy to clean up and not noticeable on the finished product.

With the river holding the liquid resin without leaking I walked away (far away, I didn’t even tinker!) for 24 hours. I came back and cut apart the fully cured sections with a razor saw to get nice flush ends that join to all the other ends almost seamlessly. With several lengths of straight pieces, a T-junction, and a couple of 22 ½°, 45°, and 90° curves the river can be configured multiple ways. Done!

Clean cuts mean no gap when reassembled on the gaming table

The last step was to put tufts of scenic grass, flowers, and other bits and pieces along the river bank. Not long after we played our first wargame with the new river. It added a lot of decision making and tactical elements to the battlefield and looks the part too. Here’s the river on the gaming table.

Thoughts, questions, suggestions, or queries? Check out the comment box below.

The next post in the terrain series is: Terrain: Build & Paint Wargame Walls

← CanGames Ottawa Convention 2017
How to Build Your Own Gaming Table →

8 Comments on “Resin Runs Through It: Building a Wargames River”