Previously we laid down the foundation of our WWII Africa Campaign Map with 3D printing, resin casting of land and ocean hexes, and assembled the map and primed it. This time we’re pouring the same realistic water – Envirotex Lite – that we used to make a wargames river. After airbrushing we’ll prepare an African campaign timeline and some other graphics to make things look good.

This part was nerve wracking. Mess up pouring a two-part resin and you can kiss the whole project goodbye. Once set it doesn’t come off and mistakes are really visible. There’s little room for error here. After very, very carefully levelling the board I decided to pour the ‘water’ on the map section first as I wanted some extra practice before tackling the top and its multiple graphic inlays and tracking charts.

This is really, really important… 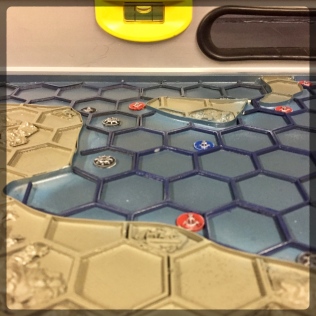 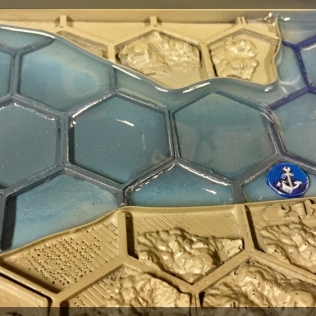 …and it WILL pool at one end if it’s not dead level.

I mixed a small batch and ran it through my vacuum chamber to get as much air out as possible. Because the resin sets up slowly you can take an extra five minutes for this step. You can also get away without doing this. It just saves on bubble popping later. I spread it into potential problem areas and around edges that I had carefully sealed with a styrene dam, clear silicone caulking, and a thin painted on layer of Envirotex which had set hard. Worked like a charm! 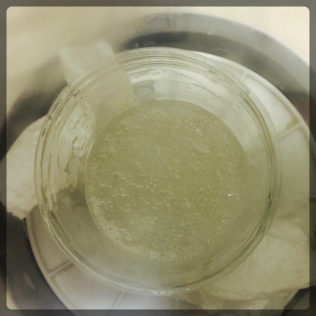 Lots of bubbles created when mixing.

Every bubble you get out here…

…you don’t have to deal with here.

From this point it was simply a matter of mixing and laying down a couple more layers until it was as full as desired. Because it sets so slowly you can keep adding for the first 30 minutes and, as long as each batch is thoroughly mixed, you can’t see any demarcation between pours once it’s all set. You should carefully calculate how much volume you need to fill and then mix up that exact amount but I couldn’t wrap my head around how to do that accurately so I guesstimated as I went. 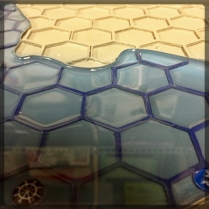 …and work it under everything…

…to get trapped air out…

…and keep adding until everything is covered.

What I’d Do Again: Use the same styrene dam and silicone with a top layer of painted on Envirotex to seal everything. Not a drop went through or under where it was supposed to go. Also, degassing in a vacuum chamber before pouring saved a lot of blowing on the surface to get the bubbles to pop. It’s the carbon dioxide that draws the bubbles to the surface. Got a friend who’s full of hot air?

What I’d Do Better: This part went exactly as planned and I’d do it the same way. A month or two on regulars to my games room are still looking at it and touching it because it looks like an optical illusion: How does liquid water sit vertically like that?

Once the Envirotex had set completely (I left it alone for a full three days) I used artist’s frisket to mask off the water so I could airbrush the terrain features without worring about overspray to give them more depth and clearly delineate mountain from desert, city from port, and so on. I used my Grex Genesis.xa for bulk spray work but I broke out my Iwata for the finer job of shading mountain hex edges and greenery, as well as adding some tonal variation to the large desert areas.

This part was a lot of fun.

Using a topo map of Africa… 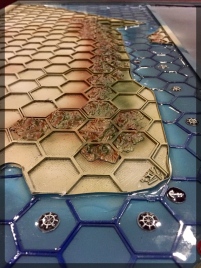 …features were shaded in.

With a little practice under my belt it was time to tackle the top graphics section. There are loads of great high resolution images readily available from the African campaign.

This did not go near as well. A small test run of pouring Envirotex over paper taught me that you need glossy paper as it sticks more smoothly on the back and isn’t so absorbent as regular open pored paper. I laid down a good layer of spray glue and then laid my pre-cut background graphics over the grey backing making sure to push any bubbles out. Because the images were black and white and they didn’t need to stand out it actually helped that the background dark grey muted the images a little but it was a good lesson learned.

Next I designed a timeline in Microsoft Word which was an exercise in agonizing which events and details should take up the very limited space. To avoid dark grey showing through I mounted the timeline on thin styrene sheet which kept the colours bright and true.

The timeline highlights key details of the Africa Campaign.

So far, so good. In the next installment we’ll look in depth at the custom made campaign tracking charts and you’ll learn a lot more about what not to do. Hopefully you can learn from my mistakes without having to make them yourself. Overall, the project is coming together well and is almost finished but there are some challenges to overcome before it’s done.

← How to Build Your Own Gaming Table
Imperial Assault: Jabba’s Realm Class Decks, Fun for Everyone? →