Roll Call summarizes the past week’s gaming exploits, and who was doing the exploiting. With the busy end of the school year rush, games have been fewer and farther between. Here’s what did hit the table.

Niagara (2004, BGG 6.4) Takes 45 Minutes with the full five players with a fair bit of time taken to look up rules. Each player controls two canoes that you navigate up or down river

a number of spaces by playing from a limited hand of Paddle Tiles. Each player gets a set of tiles in their colour that refresh once you‘ve used all tiles exactly once. You’re maneuvering to be the first player to collect a certain number and/or amount of five different coloured gems which you pick up at set spots along the river. You’re supposed to drop off your gems back at camp at the top of the river; however, you can also do sneaky things like steal gems out of opponent’s canoes or adjust the flow of the river with your weather tile to send enemy canoes over the falls or prevent yours from doing the same.

Smooth Paddling This game has two key things going for it: a really cool gimmick where the Niagara River actually moves your canoes downstream and fantastic production values. As the gimmick, each of the clear plastic discs slides smoothly down the river a certain number of discs at the end of each turn. The river moves the number of the lowest paddle tile played and from +2 to -1 depending on the weather setting. At the fork the discs divide equally, one to each side in turn, and eventually tumble off the falls along with any canoes on that disc. It’s a unique and fun mechanic that mixes together all the visual and thematic elements into an elegant, fluid board. 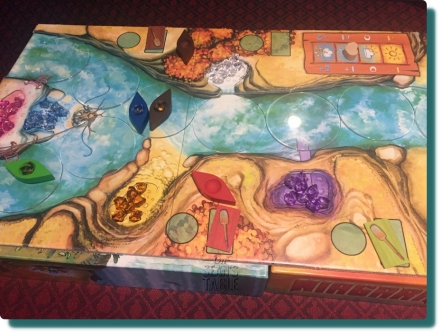 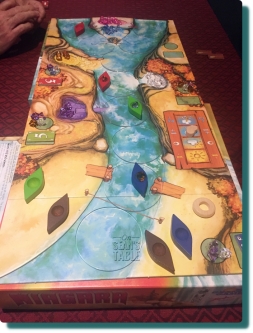 The production values are top-notch. From the brightly coloured canoes and paddle tiles in five distinct colours to the gems and multi-fold board that lays exactly across the box top and bottom to make the falls, everything works perfectly and looks fantastic. Even the storage insert is perfectly designed and executed. At 13 years old, you’ll still be hard pressed to find prettier or better designed components, even amid the slew of newer games. 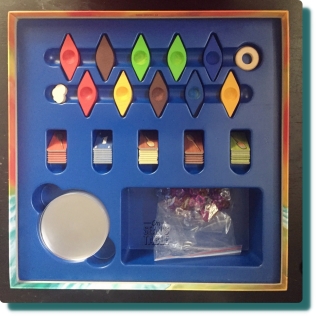 Rough Water The game play itself has two major flaws. First, the rules are finicky. The many eventualities of moving canoes up and down river, stealing gems, and loading and unloading

gems result in a complex rule set with a lot of ‘eventualities’. There’s more rulebook consultation than there should be in a game this simple at heart. This, for example, is a single page from the small print 8 page rulebook that’s needed to clarify the movement of canoes.

Second, the game fails to balance the need to plan your moves precisely with a random element of luck. Without an element of randomness or the unknown this game, and most others, would be a bland exercise in planning things out precisely right from the start. Niagara prevents card counters from winning every time by allowing players to change the speed at which the river flows. When, however, the river is bumped up to speeds four through eight it is almost impossible to keep from going over the falls. Only the 5 and 6 Paddle Tiles will allow you to move your canoes upriver at all which in turn keep the river flowing too fast. A necessary element of randomness was overcooked and results in chaos and a growing sense of ‘why bother’ instead of novelty and surprise.

The end result was best summed up by us actively rooting for a player – any player – to win so the game would end and we could move on.

This is evidence that a game after only 45 minutes has over stayed its welcome and will have to wait a long time until it hits the table again. Lots of eye candy, little nourishment in the gameplay itself.

Roll for the Galaxy (2014, BGG 7.67) I’m putting in this brief entry to emphasize that this game takes a full play through to grasp. This was that one time and it’s all a bit of a blur. I’ll cover Roll for the Galaxy more in depth after another play in a future roll call.

straight up dice roller that hinges on your ability to correctly play the odds on massed rolls of special D6s. Luck plays a role to be sure but you tend to roll enough dice and have enough ways to control or modify outcomes that rolling is a tense and satisfying experience. You’ll fail just often enough to make small victories feel like real accomplishments. If you have a bad string of rolls… well, you didn’t think the Ancient Ones were going to give up their secrets easily, did you? While you may feel hard done by you won’t leave feeling you just did an exercise in frustrating random events as you might with the aforementioned Niagara.

The dice rolling takes place in the environment created by Fantasy Flight Games within the H.P. Lovecraft Cthulhu Mythos. As with Arkham Horror, Mansions of Madness, and

Eldritch Horror this game is a masterful union of solid mechanics and pervasive theme. Essentially, you explore rooms in the Arkham Museum to gain enough Elder Signs to lock an Ancient One away before they spawn and devour the world. Along the way you’ll encounter monsters, madness, and evil minions as well as helpful allies and both magical and mundane items that help in your quest.

In addition to new rooms, items, monsters, other world encounters, and investigators to play this expansion adds the white blessed and black cursed dice. I haven’t played enough to tell you if the addition of the cursed and blessed dice unbalance the game but the rest of the content alone is well worth the buy.

For me this is a game I usually play solo. It’s good with two or three but, ultimately,

adding players means sharing the same number of actions over more people. On regular game nights there are better games for two or more players. I take this on overnight trips where there’s little entertainment on offer. It fills an hour in an engaging way.

So, is it better than the app?

Like many board games these days there’s a slick app that, to varying degrees of success, port games to the small screen. The Elder Signs: Omens app is excellent and I recommend it without reservation. What keeps the board game version in my overnight bag is the app has nowhere near as much content as the box game and available expansions. I’ve bought all three expansions for the app yet still have grown bored with the tablet version because it’s become repetitive. Even after a lot of plays I haven’t even scratched the surface of what the box game and expansions of Elder Sign have to offer. 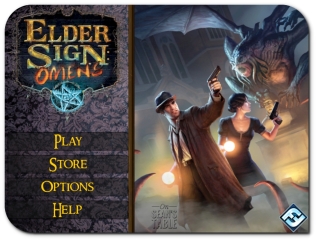 Look for a Mansions of Madness: Beyond the Threshold playthrough of both the new adventures in the next installment of Roll Call.

Any thoughts on apps for board games, Niagara, or Elder Sign and it’s expansions? Feel free to comment below. Happy gaming!