Roll Call summarizes the past week’s gaming exploits, and who was doing the exploiting. This past couple of weeks we’ve had 4 players at Thursday Night games which has allowed for a couple of long neglected 4 player games to hit the table. Friday night Madness with 2 players. Spoilers at the bottom of the post.

Machi Koro (2012, BGG 6.5)   20 Minutes, 2 to 4 Players Each turn you do the following: First, you must roll one or two D6. Second, you and the other players must activate all cards – numbered 2 through 12 – that are triggered by the number rolled on your D6. Third, you may buy one card per turn and put it into action in your play area. Then you pass the dice to the next player. If you are first to buy all four of your landmark buildings, in any order, you win. Simple!

Coins, dice, and the 4 landmarks. The Train Station allows you access to rolling numbers 7 through 12 while the others boost your ability to make money and control your destiny.

By the way, translated from Japanese “Machi” means town. “Koro” is onomatopoeia for a small clattering sound. For example, the roll of a die. The fun in Machi Koro comes from building a strategy around what cards you choose to buy. Blue cards give you coins on anybody’s roll, Green cards on your roll only, and Red ones can give you money if someone else rolls the number.

You get a Wheat Field and a Ranch as starter cards. The others you buy as you go by paying the cost in the bottom left corner. You can buy multiples of each card until the supply runs out.

More expensive cards bring greater rewards. Some are more punishing for rival players while other cards multiply the benefit of your lesser cards. Because of the statistical spread of the D6 rolls you can usually count on a strategy working but it’s always a gamble and that’s the fun of Machi Koro, if and when your gamble pays off…

The Purple cards are extra tricky, allowing you to do things like swap a building for one that another player has. The playmat is a recommended extra if you play a lot. 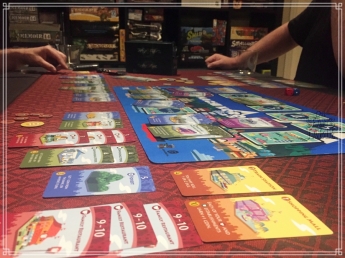 A game in mid-session.

Because so much rides on the die rolls of both you and the other players you’re always engaged and games zip by quickly. It’s rare that a group opts to play just one game as by the end most people are one or two lucky rolls away from winning. You always want a chance to “get ’em next time.” It says something, however, that two games is always enough. The potential strategies are limited and die rolls random enough that Machi Koro always makes a good opener but lacks the staying power of a deeper, more nuanced game. Nonetheless, highly recommended as a quick and fun 3 or 4 player game for newbies and veterans alike. 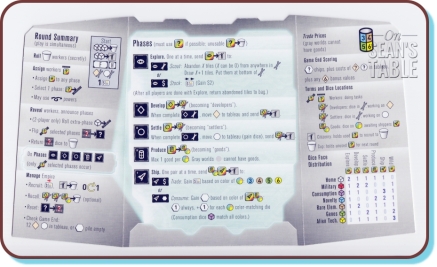 sense of what it takes to play and if it’s worth the investment. This game defies a simple summary. I offer exhibit A: The RftG ‘summary cheat sheet’  Yup, and believe it or not this is actually a succinct and useful roadmap for the game. RftG is following a recent trend of turning card driven games into cleaner dice versions with less book keeping. Roll for the Galaxy is the scion of the card driven Race for the Galaxy which in turn was derived from some of the venerable Puerto Rico mechanics. Roll in my opinion, is a better game; however, it is no less complicated than its predecessors, as the player cheat sheet indicates.

The good news is: After you sacrifice your first game to learning what the heck all those darn symbols mean and how to play, you’ll be a skilled player the second time through. You’ll just have to play it once to learn it.

The theme is galactic empire building and the core of the game is acquiring, rolling, spending, and then recycling a variety of colored D6. By going through these steps repeatedly you get more dice, explore, build worlds and technologies, and gain victory points. The game ends when a player builds their 13th tile or takes the last available VP chip. Most VPs win. It’s an attractive, colourful game that belies the complexity underneath.

Dice cups come with the game 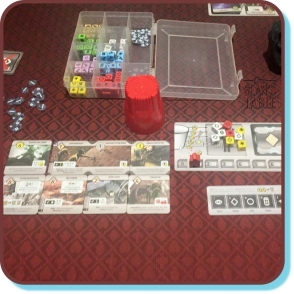 My tableau in progress

Each player starts off with three starter worlds and/or developments. Here are a couple of examples. Acquired 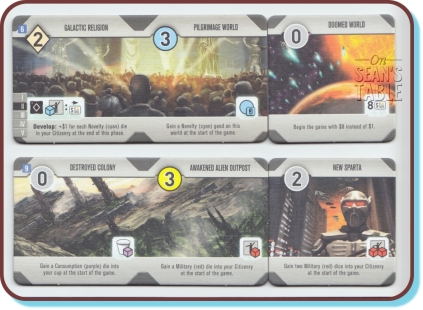 dice go in one of three places: directly into your cup, into your citizenry, or onto a world. Because you must pay to move dice from citizenry to cup and must produce in order to have goods on a world to ship, some planets come with bonuses and so are better to settle than others.

The top three starter tiles gives you one blue die directly onto the world. You can ship it directly from there for profit or VPs but it’s a laborious and expensive process to get that good produced again on the planet so you can ship it again. The bottom set gives you a blue die directly into your cup and three red into your citizenry. I think you can see already that the game has a lot of moving parts!

Below you can see a player’s tile, loaded with lovely dice in the citizenry although precious little money to transfer any to the dice cup. Also, an empty player’s tile. This is where you track your money, house your citizens, and build your empire. Top right is the list of actions a player can select from. You get to pick one per turn but can benefit if another player picks something you can use as well. Again, the iconography is daunting at first but easy enough to master after you play once. 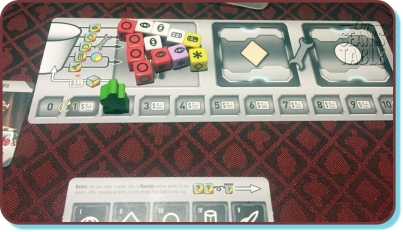 with. It’s really abstract with little player interaction but there’s no player elimination and it has the rare quality of ending suddenly and sooner than you had hoped without leaving you feeling ripped off.

Despite the learning curve, it always leaves you wanting just one more turn. Enough said.

Warning, Mansion of Madness spoilers below the break.

Mansions of Madness 2nd Ed. (2016, BGG 7.7) Vengeful Impulses from the Beyond the Threshold expansions.

Meanwhile, back at Kessel Run Games in Orleans, Seth and I are up to Friday Night Madness yet again. Even with a lot of experience playing MoM we barely squeaked out a win on this the easiest of the two adventures from the Beyond the Threshold expansion.

We took full advantage of the new investigators – Wilson Richards

and Akachi Onyele – from the expansion and found them fun and effective to play with.  Akachi is a spell casting and monster management machine while Wilson is almost always focussed and able to re-roll multiple dice at need.

We also used one of the recently released dice packs so we had 11 to play with instead of the original 5 that came with the game. A small thing but, really, who doesn’t need more dice? And I have to say they came in handy.

We successfully finished the investigation but, as usual, the clock is always ticking in the Mansion and we made it by the skin of our teeth with one character dying on the last turn with the remaining character able to, only just, complete the investigation. As usual, the win was tempered by the grim realization that our puny efforts only delayed and didn’t stop the inevitable doom to follow. We stood helplessly by while all our suspects were released and returned to their daily lives knowing for a certainty that one of them will attempt again the unholy ritual that killed our friend and drew us to the Mansion in the first place. 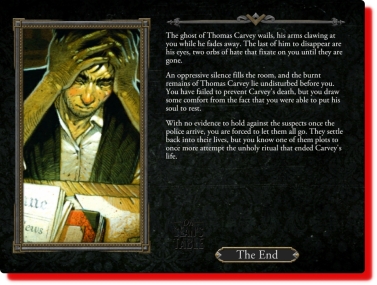 Part way through the Mansion 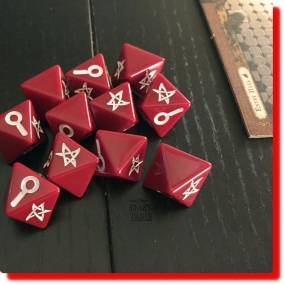 Once again, Kessel Run Games and the Skywalker Room hosted our evening in style. Kinda like your living room, but in a game store, with games and no interruptions, with cool Star Wars stuff all over the walls.

Feel free to share any thoughts on these games down below.

One Comment on “Roll Call: Machi Koro, Roll for the Galaxy, and Vengeful Impulses”