Nowhere is the cult of the new and shiny more evangelical than on Kickstarter. The crowdfunding website has become the release venue of choice for most startup and many established gaming companies. Almost daily, a new project goes up in front of the court of public opinion with more and more projects getting the funding needed to launch. But do these Kickstarter projects deserve our money or are we allowing products to bypass proper development and testing before being brought to market?

First, a key distinction. Kickstarter crowdfunding is at it’s best when it allows creative talent to bypass the gatekeeping process of bank loans, the necessity of taking on silent partners, and compromising their original ideas in order to cater to a mass market. It should allow passionate people a way to share their ideas, get exposure, and at least break even doing so.

Kickstarter, however, has increasingly become a way for big companies like Mantic Games to get punters to shoulder start-up costs without companies exposing themselves to risk on a product that isn’t ready to launch in and survive the retail environment. Too often, revised versions of games and rules appear on store shelves shortly after (and sometimes before!) Kickstarter backers get their pre-revised and not sufficiently play-tested versions. Backers have, in this instance, funded the company’s release of an unpolished version and unwittingly become the quality control and play testing process that should have happened before the product hit the market.

L5R RPG Beta. Fantasy Flight leads the way by allowing for crowdsourced testing and feedback before it goes to print.

It’s easy to understand how this happens. A company whose product must hit the shelves in its best and final form will do their initial play-testing internally and then test their product through many beta versions with trusted playtest groups all over the world. Game developers like Sam Mustafa have this down to a science and companies like Privateer Press are really open with the process. The latest version of Warmachine and Hordes by PP – together, arguably the second most popular miniature games rule set – was tested extensively by anyone who wanted to download the rules for free, try them, and then give feedback. The product that appeared on shelves after this exhaustive and well-organized process was as polished as they get.

Conversely, a company who launches through Kickstarter is by default absolved of such rigorous up-front work unless they very deliberately choose to take it on. While, perhaps, not a deliberate decision the pace and demands of running the Kickstarter campaign itself often jumps the queue and soaks up the time and creative energy that should be poured into the final stages of play-testing and tweaking a product prior to release. Now you’ve got a situation where someone who is great at ideas and, hopefully, re-creating those ideas in a physical form is managing the business of running a Kickstarter and over extending themselves as they try to keep the stretch goals coming should they be successful.

At its worst, Kickstarter campaigns will short-circuit the creative process entirely. There are many, many stories of Kickstarters that deliver a year late, or never deliver at all, because the campaign itself pushed product creation to the side. The creators were, in fact, putting their time into busily selling a product that hadn’t made it out of the development stage. Unwittingly, not only did backers fund a rushed and underdeveloped product but paid finished product prices for something still on the drawing board.

Bigger companies now routinely use Kickstarter as a pre-order and product release venue.

Crowdfunding allows them to cut out the middle-man of distributors, on-line stores, and brick-and-mortar stores. In short, it’s an often over-hyped company webstore.  In exchange for higher profit margins companies pass on a bonus to the backers in the form of stretch goals and other ‘signing’ bonuses. The irony is that the more backers a project gets the longer it’ll take to deliver and the less testing the base game and stretch goals themselves will get. 3D artist’s renders of figures and game pieces look fantastic and are proudly displayed on Kickstarter campaigns.

What they don’t disclose or, worse, haven’t had experience with yet is the long and

laborious process required to turn an idea and Computer Assisted Drawing (CAD) into a physical model or play piece. More often than not this requires (literally) a slow boat to China, and back again for manufacturing. Even for experienced Kickstarter developers that journey is fraught with cost and time overruns, mistakes, and underestimates of production and shipping costs. All of which become the backer’s problem eventually.

So why do we gamers back Kickstarter projects? Kickstarter has permeated every gaming news service, podcast, and blog and it’s easy to make new things look fantastic and shiny on the web. We love new shiny stuff just like everyone else. For gamers the gamble of backing a project can be a game in itself. Can you be the one to identify the next big thing and get in early? Below you can see that leading gaming podcasts, websites, and magazines regularly feature products that are still in development. Temptation abounds! 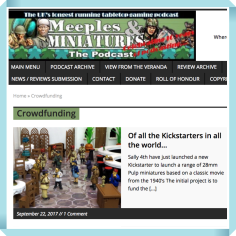 Crowdfunding is a regular feature on M&M

“Let’s Play” feature, On a Kickstarter! 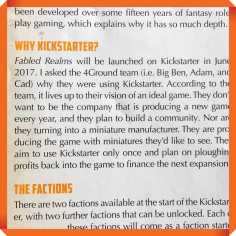 The right reason to launch with Kickstarter

To be fair, Kickstarter tends to deliver well on things like figures, components, and accessories: the tangible. Games themselves and rule set quality, however, are impossible to gauge until they have been played extensively. I’m comfortable buying tangibles like figures, dice, and accessories (provided I can see proof that they aren’t just CAD sketches and are ready for or have undergone a production run) but there’s no way I’m buying into an expensive game, no matter how pretty, until I know the mechanics underneath the glossy exterior are tested, challenging, balanced, and offer replayability. 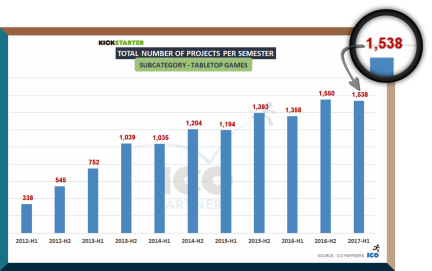 diamonds in the rough at best. The gaming market is saturated right now and we can choose Retro-Game Nights to get more out of previous great purchases.

As consumers we can afford to be patient. Rest assured, the glut on the market isn’t going away soon. More shiny stuff is just around the corner. If you are going to do Kickstarter please do us all a favour and make sure the company you’re backing has the funding, intention, will, capacity, and ability to polish their product before they ship it to you.

What’s your take on or experience with Kickstarter? Is the best or worst thing that happened to tabletop gaming?

← Cthulhu Between the Sheets: Fact and Fiction
The Light at the End of the Terrain Tunnel →

3 Comments on “Kick the Kickstarter Habit”