Cooperative games that band players together to vanquish an emerging threat have a lot to offer. Good ‘coops’ keep players on their toes, even when it’s not your turn, and are very social, demanding players closely coordinate what they’re doing without allowing a single player to dominate and ‘quarterback’ everyone’s moves. Eldritch Horror remains my favourite game in the coop genre because it allows a very complicated set of mechanical checks, balances, and challenges to disappear into the background so teamwork and a compelling story can remain the central focus.

Part 1: Collaborating Against Cthulhu Recently, I invited the Thursday night game group to get together for an extra session of

Eldritch Horror. (Editor: I know, not an original name for a gaming club but every game group I’ve named dissolved shortly thereafter! This one shall remain nameless.) We had a run at the Ancient One we’ve never defeated: Cthulhu himself, but not for lack of trying!

There are dozens of moving pieces within Eldritch Horror: a multitude of card decks, trackers, tokens, Investigator sheets, Ancient One mysteries, and a busy game board. All serve a dual purpose.

First, they all put a ‘clock’ on game play. You have a certain number of health, sanity, actions, Mythos cards, and turns to solve three mysteries unique to the Ancient One you’re up against. Cthulhu thwarts you by making it difficult to move around the board and presenting you with difficult mysteries to solve. Usually, you need several turns of preparation before you can attempt Cthulhu’s mysteries. All the while the game ratchets up the difficulty with imminent disasters to which you must attend instead of fulfilling game winning objectives. Tick Tock. 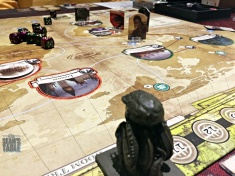 Lord of all he surveys 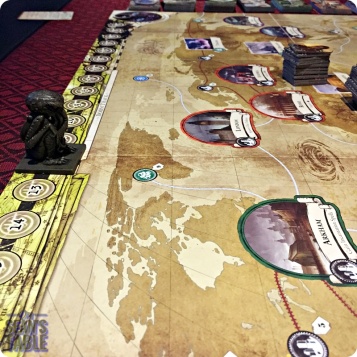 Second, the components deliver a story. In our game, Cthulhu’s brooding presence manifested itself through encounters with his cultists while the Omen Track aligned stars in unnatural configurations that opened gates to other worlds and spawned monsters worldwide. The delivery of a cohesive story through the same components that also seamlessly manage the mechanics of the game is what makes Eldritch Horror special. 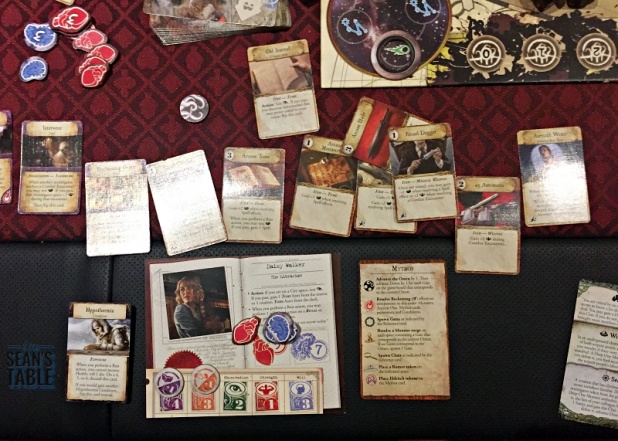 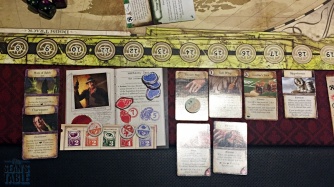 Character development brings the world-spanning machinations of the Ancient Ones

down to a personal level. We spent a lot of time developing skills, acquiring weapons and spells, and generally tooling up so our characters could do battle with the minions of Cthulhu. There was a genuine sense of loss when a carefully developed character plumbed the void once too often and went insane, or worse was devoured entirely. Eldritch Horror allowed us to start a new investigator the turn after we lost our previous character; however, the aptly named Doom Track ticked down ominously every time an investigator was eliminated, punctuating the peril that drew ever closer. Tick Tock. He’s coming…

The Thursday game group are now practiced hands at most games. Through careful play we successfully collaborated against Cthulhu but it was a tough go. Cthulhu makes even routine movement between locations difficult and tends to stifle you to death. While thematic this can be a grind and so it was with an equal sense of relief and triumph that we solved the final mystery and collectively won the game. There are Ancient Ones that are more fun to play against and I think, for the time being, that Cthulhu will be left to his eternal slumber in favour of trying our hand against the other Ancient Ones. Time’s up…

In the Retro-Game Night post I wrote about how buying expansions for proven favourites is often a better use of your gaming budget than the unproven new and shiny. These expansions need not take up all your storage space. I’ve got just about every expansion for Eldritch Horror into two well-organized boxes. Here’s a look at how I set up the boxes with foamcore inserts and card dividers. Mouse over the pictures for more details.

Box One All Reference, Mystic Ruins, Expeditions, Encounter, Other World, Mythos, and Adventure cards in a tabbed index. All small Item, Relic, Spell, Condition, and other cards in a five slot card tray. Big box expansion Clue, Other World, with tokens and cards in individual card cases. Dice and doom trackers.

Still lots of room for another expansion, or two… 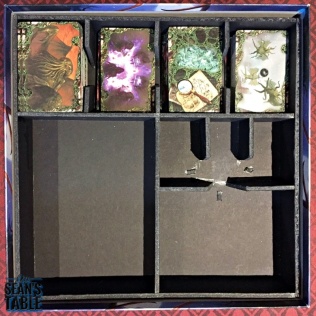 Investigator and Ancient One cards 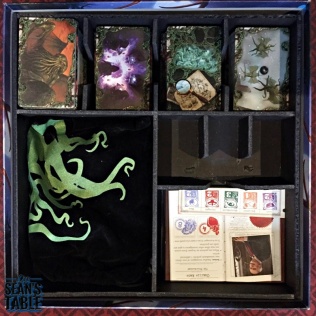 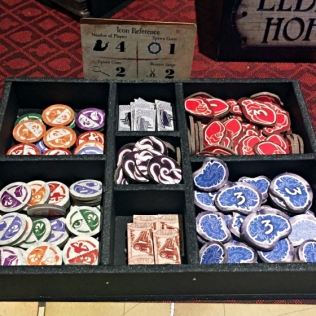 Other tokens in a baggy

Main game board keeps it all down 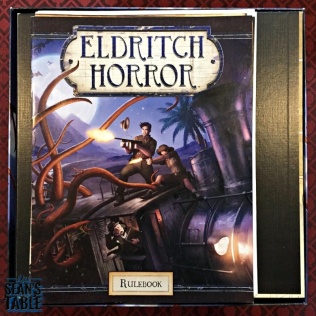 Cthulhu Between the Sheets: Fact and Fiction

← The Light at the End of the Terrain Tunnel
Space Hulk by Games Workshop: Buy It Again? →