I recently blew the dust off my 2009 Space Hulk big box game. With publisher Games Workshop reaching back into the vault to redo old titles left, right, and center I figured two could play at that game! In an effort to work on “wanting what I have” through “retro game nights” I recently got in numerous games of this often redone and re-released classic.

Yes, you’re right. This is a thinly disguised reworking of the Marines Vs. Aliens corridor battles from that movie series. Games Workshop has managed to stay just on 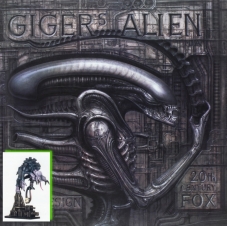 side of IP transgressions while incorporating every major sci-fi and fantasy trope, archetype, and meme into their gaming systems. The “Tyranid” aliens look like they’re straight out of the imagination of H.R. Giger, the artistic concept artist behind the Aliens movie. Inset: Tyranid alien from the Space Hulk boxed game and Giger’s original. Look familiar?  The soldiers are indeed Space Marines from the Blood Angels chapter and, yes, there are flamethrowers and rapid fire weapons that jam and run out of ammo. The Sin of Damnation is a drifting space hulk that carries the seeds of an alien menace too dangerous to live. I really wish someone would make a movie about this stuff…

For many, the inclusion of models to represent the aliens and marines is worth the price of admission alone as they can easily be slotted into armies for tabletop miniature games like Warhammer 40K. For everyone else, the price tag is steep but not totally ridiculous by today’s standards as you get a TON of high quality, embossed tiles, doors, counters, tracking sheets, and so on. The models are typical of GW: beautiful sculpts, heroic, overblown, layered with armour and scrollwork, with massive weapons. If you choose to paint them or not the models look impressive and do add to the theme of the game. There’s also lots of GW’s trademark “In the grim darkness of the far future…” flavor text and artwork in both the rule and mission books to set the mood. 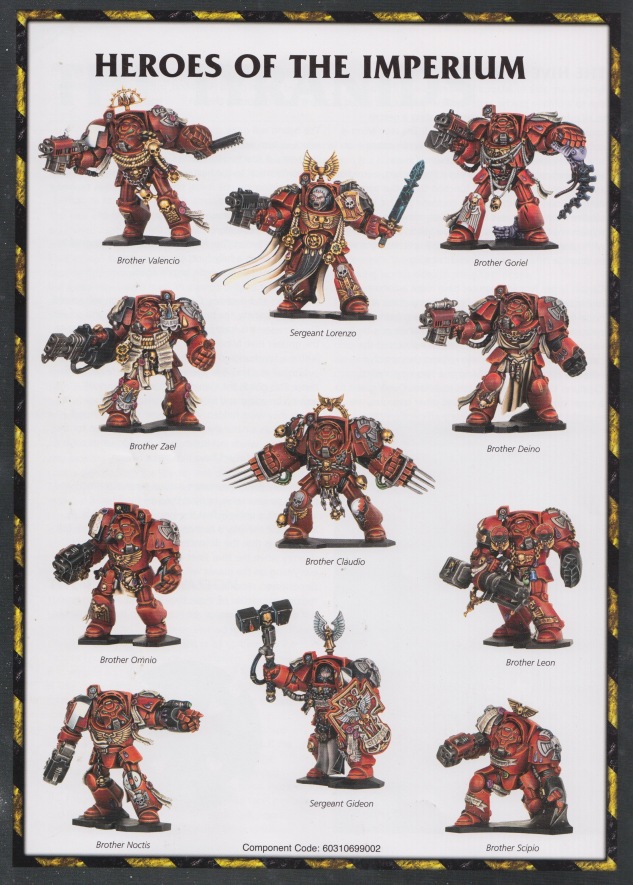 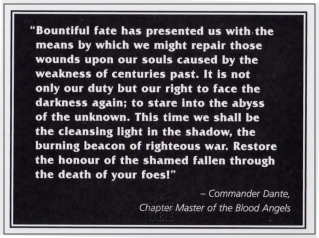 Grim and far-future enough for you? 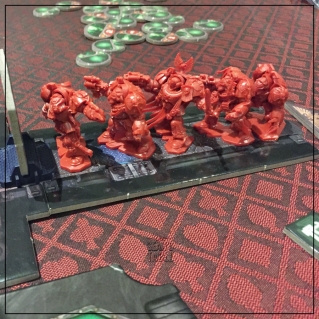 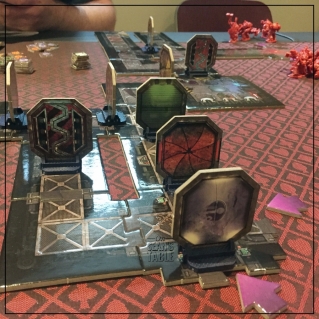 What’s behind the door?

Strip the theme, glitz, and shiny bits away and what you’ve got is a puzzle game. The Space Marines have a limited number of action points to spend in order to accomplish 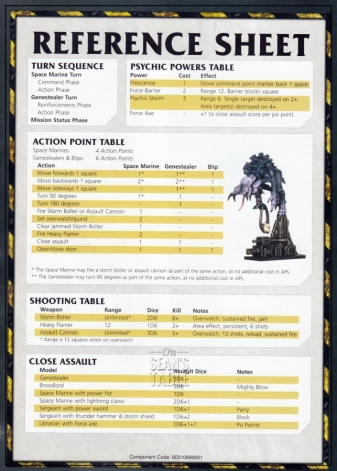 objectives before getting overwhelmed by an increasing tide of Tyranid aliens. If you use your actions efficiently you give yourself a good chance of ‘solving’ the puzzle and winning. Meanwhile, the Tyranids’ job is to make life difficult for the Marines by probing for weakness, spreading the Marines thin, and costing them actions enough to get into base contact where Tyranids shine in melee, rolling 3D6 to the Marines 1D6. Marines need to use shooting and, if they’re stuck, defensive melee abilities to keep the horde at bay and survive. Here’s how it works in more detail.

Each round the Marine models inch closer to their goal of surviving and escaping by ending their turns in an optimum defensive posture. Each Marine has 4 action points (AP) it can spend each turn. Looking at the reference sheet you can see that movement takes 1 or 2 AP, shooting 1, unjamming your gun 1, and, most importantly, 2 AP to go on Guard or Overwatch. These two stances allow the Marine to act during the Tyranid turn to cover each other’s back, block hallways, and fight effectively enough to survive to their next action round.

Overwatch allows a marine to shoot 2D6, hitting on 6s, each time a Tyranid takes an 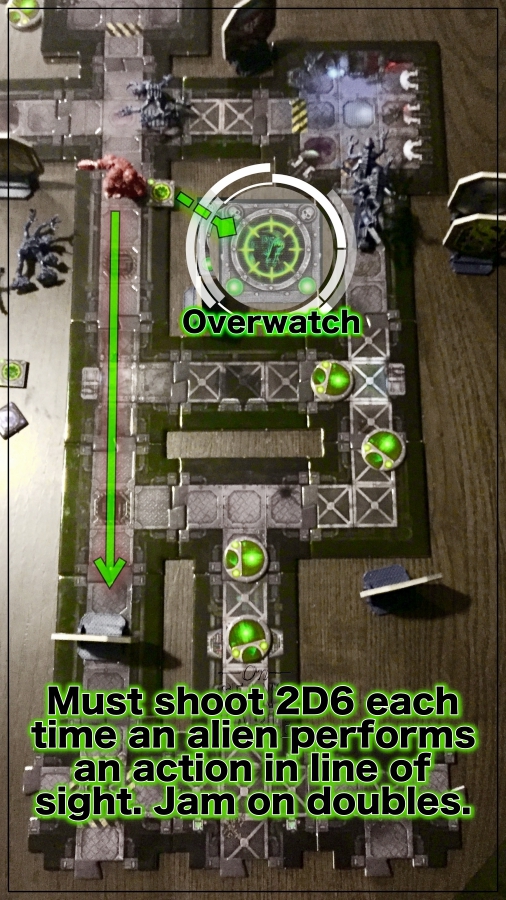 action in his line of sight. Sustained Fire allows the Marine to hit on 5s and 6s after he misses the first time. If you give yourself enough line of sight you can mow down almost unlimited numbers of aliens as then run at you.

If you roll doubles your gun jams, but you can unjam your weapon, even if it isn’t your turn. See the later section on Command Points.

In the example on the right, the Space Marine can shoot (max 12 spaces) the length of the hallway in front of him. Unfortunately, the aliens are wise to the ploy and are able to get both models and blips around behind him.

Cue the Guard posture. A Marine who doesn’t have good line of sight might be better left guarding the back of a Marine who does. The guy in the Overwatch example could really use a buddy guarding his rear! If an alien can reach and attack him from behind he’ll get 1D6 to the alien’s 3D6. Even if he ties or wins the best he can do is lose his Overwatch status, turn to face his attacker, and fight again at a 3D6 to 1D6 disadvantage.

A Marine on Guard can reroll his 1D6 after he has seen the alien’s roll on 3D6. Still not a 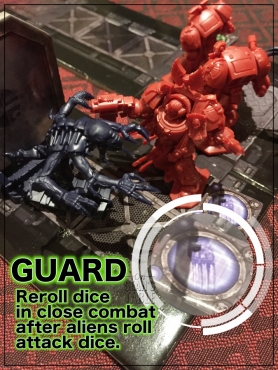 great deal for the Marines; however, there are some badass Marines with weapons that get them an extra D6 or a +1 or +2 bonus on die rolls. Still, the message is that you never want to enter melee with an alien. Even the best Marine with the best gear cannot fight through a horde of aliens in close combat. The guy on the right lasted one round of combat but he did delay the aliens long enough to keep his buddies alive for one more round. The aliens have 6 AP per turn and don’t suffer any penalties for turning. They’re on you before you know it. Really, someone should make a movie about this stuff…

There’s one advantage the Marines have, and it’s a big one. At the start of each round you secretly draw a Command Chit at random – numbered 1 through 6. If you’ve got a sergeant on the table you can re-draw if you don’t like what you pulled but must keep the second draw. You can use these extra command chits as Action Points (AP) at any time on the Marine and/or alien turn. So, it might look like your Marine is hung out to dry, within easy reach, but just before an alien attacks you can unjam your gun or take a step back to safety, leaving the alien hung out to dry instead. 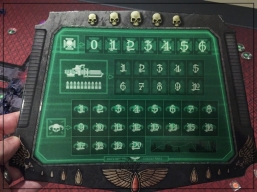 The Marine’s tracking board for Command Points and Ammo

Or, you can leave a Marine in a hallway seemingly undefended and then put them on overwatch just as the aliens storm into sight. This simple mechanic greatly improves the gameplay and allows for really tense “Is he bluffing?” moments. The use of these extra APs is so varied that you’ll never fully explore all their uses. The command chit system and their contribution to the narrative and puzzle solving raises Space Hulk from an average game to a really, really good one.

By comparison the Alien Tyranid player has fewer options and less to think about. In 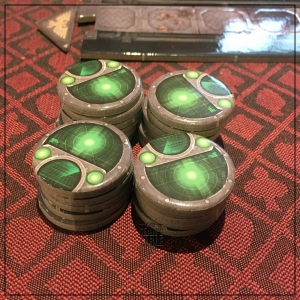 short, the alien’s job is to make life as difficult as possible for the Marines – making them use up precious action points – until Tyranids can close to melee distance. The one bit of trickery they have above and beyond moving Tyranid models is the deployment, movement, and reveal of alien blips.  Just like in the Aliens movie franchise, blips in the vicinity mean the bad guys are coming but the Marines have no idea how many until the blips are revealed and 1, 2, or 3 aliens are placed on the board.

We found that even with very efficient play, as with most GW games, luck plays a huge role (yes, I meant to write that). In theory, if the

law of averages prevail the die rolls should make it fun and tense but should not be the deciding factor. In practice, we found that if the Space Marine player does not consistently roll at least one 5 or 6 during a series of four D6 rolls they’ll lose. In the first game with Duncan the Space Marine player won because Tyranids couldn’t make it past 3 squares of movement without getting blasted. In the second game, the Tyranids won because six chances to roll a 5 or 6 didn’t work out for the Marines. Some gamers have a high tolerance for a game riding on a couple of die rolls. Enjoying Space Hulk depends if you’re that kind of gamer or not.

The 12 missions included with the game tie it all together.

There are 12 missions that gradually introduce gameplay and concepts until by mission 5 or so you are using everything included in the box, including multiple squads of Space Marines and a Broodlord (read Hive Queen). While time-consuming to set up, each Mission plays on a different configuration of the modular board. With different mission objectives this adds a lot of replayability; especially, when you switch sides for each mission so both players get a chance to play Marines and Tyranids. 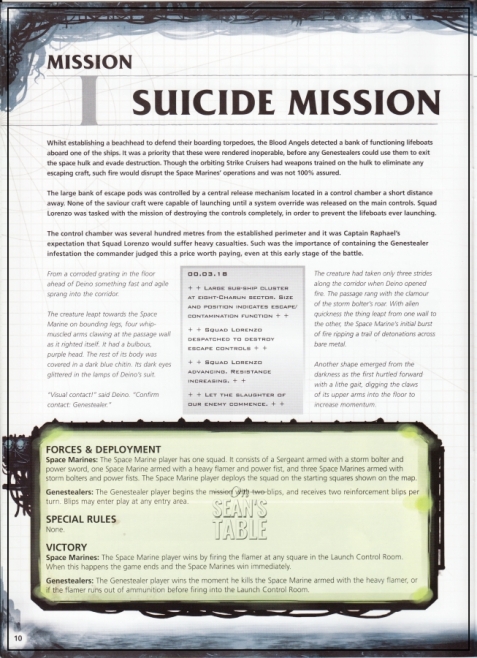 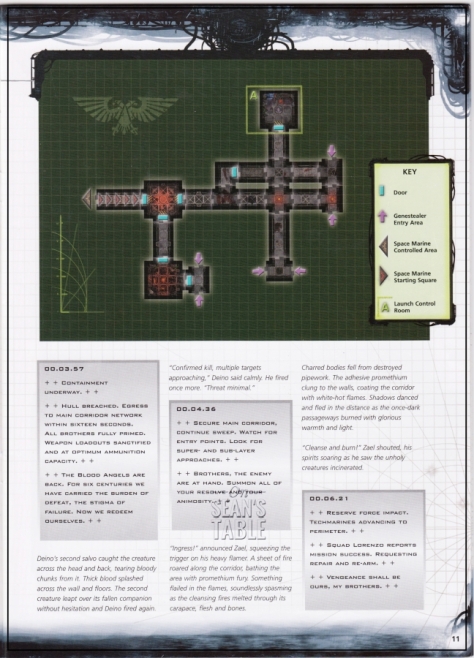 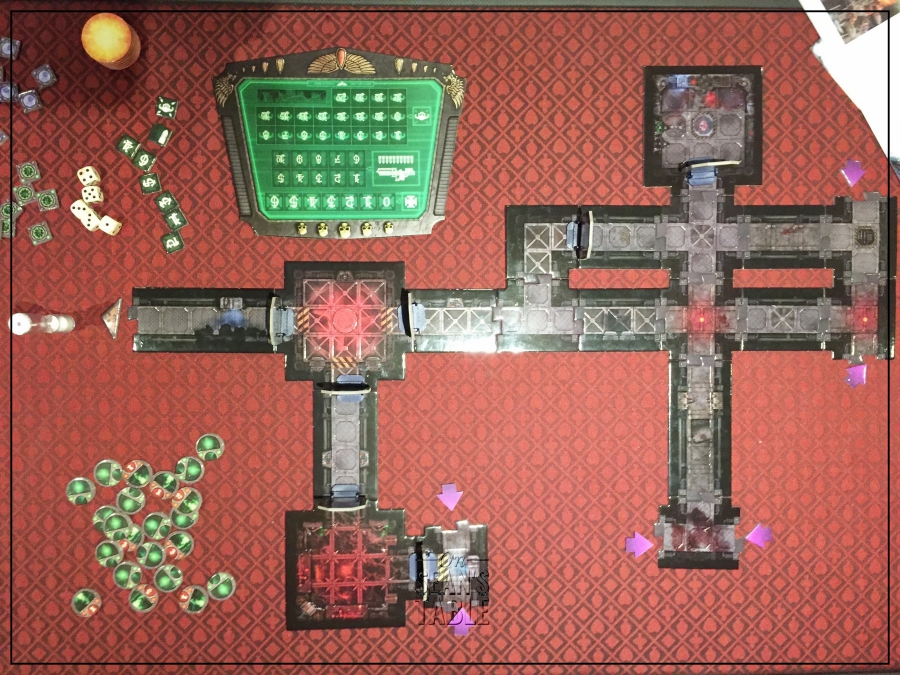 Mission map on the table 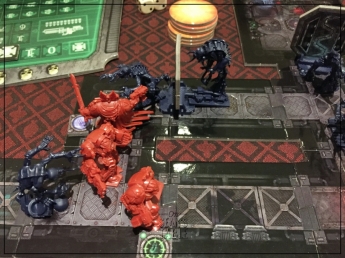 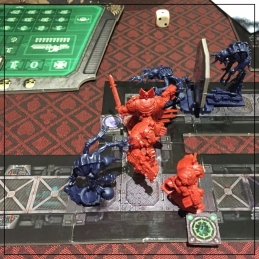 Tyranids get in behind 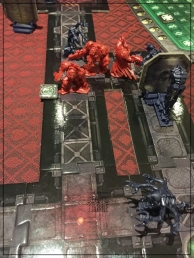 Ripley: How long after we’re declared overdue can we expect a rescue?
Corporal Hicks: [pause] Seventeen days.
Private Hudson: Seventeen *days*? Hey man, I don’t wanna rain on your parade, but we’re not gonna last seventeen hours! Those things are gonna come in here just like they did before. And they’re gonna come in here… 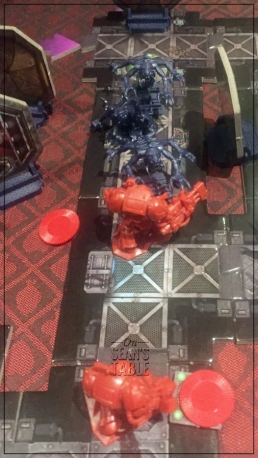 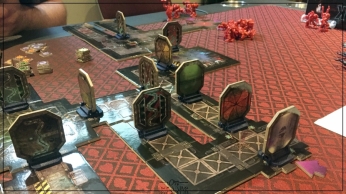 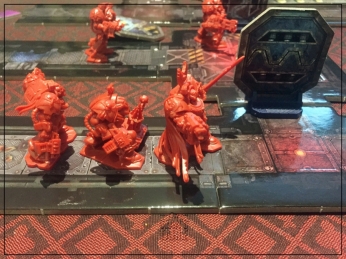 The rules say what?

Final Thoughts: I love the big box of stuff you get and all the glossy surfaces and miniatures. I love the theme and being able to sweep a ship of aliens in the cause of mankind’s very survival. Yes, the flamethrower is fun! Many of the underlying game mechanics are clever and add to the theme. After many years and reprints the rules are solid and offer a balanced and tense play experience. I appreciate how a Games Workshop fan would really dig the models.

Even though I split the original cost with gaming buddy Seth I wouldn’t, however, do the same again.

For the price you could get Imperial Assault if you want a better designed, branded, corridor crawler. Or,  you could get a whole bunch of Memoir ’44 stuff if you want a great, shortish two-player game with good production values and huge replayability. Actually, you could get just about anything for the price of the latest edition of Space Hulk. Unless you’re a 40K universe fan and must have a game in that setting, spend your cash elsewhere. I will, however, keep my older copy in my collection and enjoy playing it!

Do you have any favourite Games Workshop boxed games? Do Space Hulk, Blood Bowl, or Dreadfleet have nostalgia value for you?

One Comment on “Space Hulk by Games Workshop: Buy It Again?”