The earliest physical dice on record date back to a Bronze Age dig site in Turkey. The Egyptians, Romans, and Chinese played with dice hundreds of years before we started numbering years upwards from zero. In the 17th century Galileo used dice to codify the first mathematics of probability. The humble six-sided die has kept intellectuals, gamblers, families, and sailors entertained since we figured out how to push our luck and roll the bones.

examples of D6 push-your-luck probability games that firmly crossed over into popular culture and stayed there. Liar’s Dice has featured prominently in the Pirates of the Caribbean movie franchise and regularly gets re-released. Since 1956 Yahtzee has had dozens of iterations including Doctor Who Yahtzee and the soon to be release Guardians of the Galaxy and Walking Dead Yahtzee. Remember I said popular, not necessarily good! 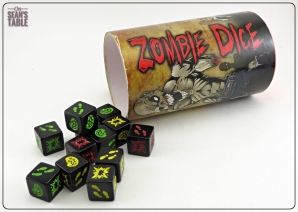 In this current Golden Age of board games Zombie Dice by Steve Jackson Games is for many the ‘gateway’ game that made dice rolling fun again. It most certainly has flaws but there’s no denying its widespread appeal. You can find it sharing shelf space with the iconic Risk and Monopoly in-game stores, children’s toy stores, Wal-Mart, and Target. It’s also readily found in the better game stores that would absolutely not carry Monopoly. Let’s have a look at what made Zombie Dice so appealing.

The zombie theme has been done to death but we still can’t get enough of it! The goal is to be first to collect and eat 13 brains over multiple rounds of rolling the dice. After each roll you can end your turn and eat all the brains you collected. If you choose to continue you must keep and re-roll any of the ‘running feet’ die that came up during your last roll and draw new dice from the cup until you have three total. Shotgun blasts must be kept. If you get three of them your turn ends immediately and you eat none of the brains you collected.

There are multiple layers of probability to play with. Each of the three types of coloured dice – green, yellow, and red – has a different distribution of brains, running

feet, and shotgun blasts. You’ll be far most successful pushing your luck by re-rolling the green dice that have three sides showing brains than with yellow or red that have an increasing number of shotgun blasts. Once you get familiar with the game you’ll also recognize that if you’ve got a bunch of green dice out of the cup already you’re more likely to pull a yellow or red. These extra layers of guesswork keeps Zombie Dice interesting far longer than you’d expect from a simple dice roller. There are the inevitable expansions (my favorite is the ‘School Bus’) which elaborate on the original theme.

While walking the hallowed halls of GenCon 2011 late on the fourth day – weary but with enough energy for just one more lap of the dealer’s hall – I came across the (then) small Tasty Minstrel Games stand. They gave a quick demo of their new Martian Dice game and were surprised when 30 seconds in I handed them a tenner and said, “I’ll take it!” before hurrying off in a feverish quest to make every last-minute at GenCon count.

Martian Dice (2011) is as good as Zombie Dice (2010) but it’ll always be the game that ‘copied’ the original. Granted, there are many similarities but it’s different enough that I feel it deserves a fair shake before dismissing it. 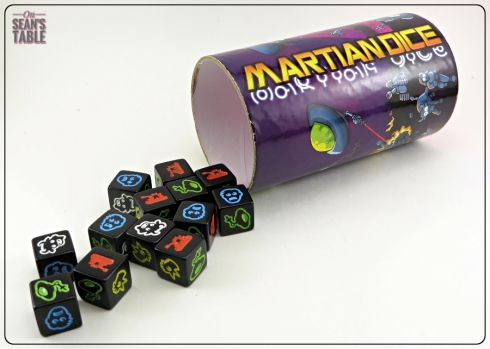 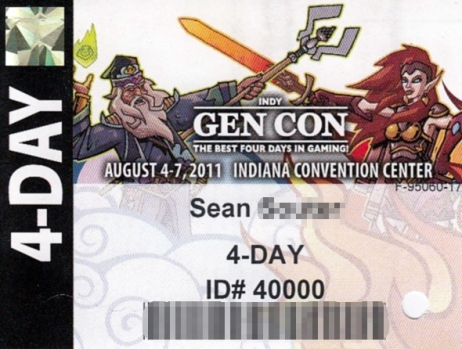 All 13 of the Martian Dice have the same symbols (see picture above). First, you roll them all. You must keep all the Tanks that are showing. This is Earth’s pathetic attempt to drive we Martians off their almost worthless planet. Second, you must choose one type of dice to abduct (humans, chickens, or cows) and set aside all dice of that type. You may not keep the same type of dice you set aside previously on your turn. Third, you may also keep all the Martian Death Rays which counter Earth’s puny tanks.

Keep rolling and pushing your luck until you have at least as many Death Rays as tanks and say stop. Then score your points: one for each human, chicken or cow and a bonus three points if you have at least one of each Earthling type. If you push your luck too far and wind up with no chance at matching or beating the number of tanks that show up, score nothing. First player to 25 points wins.

The promise, challenge, and roller coaster ride of using your wits to manage a random outcome within a carefully defined set of possibilities have kept casinos in business for centuries.

Ultimately, Zombie and Martian Dice have lost their appeal for many gamers because if you’re not rolling the dice the game is pretty boring. Watching others roll dice only stays exciting if there are sums of money in the balance. Currently, we’ve got little tolerance for games and recreation that make us wait our turn to do the fun stuff.

Let’s look at a few games that have incorporated the push-your-luck dice dynamic in ways that keep everyone at the table a little more involved.

Netrunner) takes away a little of the push-your-luck aspect by limiting players to three re-rolls. To keep it interesting there’s a strong element of direct conflict between players as their monsters duke it out over control of Tokyo. Despite inventive and eye-catching refinements on the game surrounding the dice rolling, you’re still left waiting impatiently for other people to hurry up and pass you the dice.

Age of War (2014) by equally notable game designer Reiner Knizia uses managing dice probability as the means to conquer iconic Warring States period (Sengoku Jidai) cities. In a neat twist you can, at the expense of pushing your luck and needing to roll an additional helmet symbol, capture cities already taken by your opponents. This tends to make people pay attention when it’s not their turn and make the wait for the dice a little more interesting. Each of the rows on the city must be completed in one die roll. As dice become locked onto the rows on the cards it grows harder to get what you need. Kasugayama, for example, requires two Bowman or two Cavalry from 7 dice on your first roll and then two of the other on your second roll of 5 dice, or third roll of 4 dice, and so on.

Some classic games, such as Bang! or Race for the Galaxy or Pandemic have been given dice driven versions. The allure of rolling the right combination at the right time has resulted in the dice versions gaining more popularity than the original card driven versions. Expect to see many more dice driven games in the future that incorporate push-your-luck elements. Gamers, more so than anyone, like to roll the bones.

Do you have any favorite push-your-luck games?