I came across a range of WWII vehicles by Blitzkrieg Miniatures while perusing the Perry Miniatures website and thought I’d take three of them for a test drive. A couple of weeks later a lovely batch of Perry Desert Afrika Korps (DAK) minis showed up in the mail along with vehicles to transport them. Here’s how the resin Blitzkrieg vehicles worked out.

The 1/56th or 28mm scale is pushing other scales out of the spotlight. With the increased focus on skirmish level games, small squads of bigger figures in 28mm have executed a successful hostile takeover of the tabletop. There are now dozens of suppliers putting out a diversity of great stuff in 28mm. So diverse are the offerings there are now some major size differences within the 28mm scale itself.

Blitzkrieg Miniatures are more of a scale with the diminutive and uniformly high quality Perry Miniatures than with, say, the minis from Warlord Games. If it matters that your entire army looks ‘in scale’ you really do need to make a choice right off the bat. I decided early that I’d use Perry figs for all my troops so Blitzkrieg vehicles made good sense.

The vehicles come packaged as securely as the Perry figs they were shipped with, which is to say almost a work of art rivaled only in padding and sturdy boxes by Die Waffenkammer minis. Combined with the small parts count nothing was broken or amiss straight out of the box.

I can’t, with due diligence, say the product was entirely as impressive as the packaging. The SdKfz 222 and Steyr 1500 Personnel Carrier are beautiful with crisp detail and a bare minimum of flash. Really impressive seeing as they are basically cast as a single piece. Wonderful to assemble and paint. The 250/1 Alte, however, needs work.

A Slight Detour On the Road to Completion 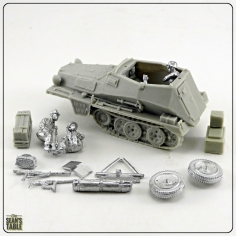 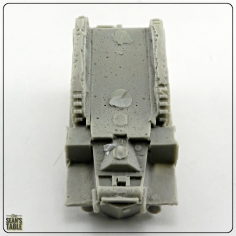 This was my first purchase of Blitzkrieg vehicles and while I get the impression this is an exception rather than the rule, the Sdkfz 250/1 Alt was decidedly imperfect. I’ve done a fair bit (i.e. about 1000 items) of simple resin casting and could see clearly that the 250/1 resin was subtly a different colour to the naked eye than the other two models. There were also noticeable bubbles on the underside of the model which is usually the result of the resin setting too fast so as to trap bubbles, or some other resin or casting inconsistency.

These two details made it difficult to accurately assess the cause of very obvious undulations and soft detail on the upper surface of the vehicles hood. These were even more noticeable once the model was painted. I wrote to Perry Miniatures about the issue and was rewarded with a very prompt reply by Michael Perry. He wrote in part:

Hello Sean,  The halftrack does need an overhaul to correct the slight undulations in the bonnet (hood) but I’m surprised that there are air bubbles as it’s another Blitzkrieg resin casting and they don’t normally have that problem. Figures by myself, metal casting by us. Hope that helps, Michael Perry

Helpful indeed. To be clear, the bubbles were on the bottom of the model and not at all visible on the upper surfaces, where it counts. I thought I’d follow this through to conclusion and wrote to Blitzkrieg directly. Here’s what they had to say.

Hi Sean, Thank you for your email message.
The model in question was created from a metal master and as such metal castings do on occasions have ‘pitting’ on the surface of the model which then is reproduced onto the resin model which is cast ready for sale.

Perry Miniatures are aware of this and are looking into the situation and discussing the best way to resolve this models issue.  In the meantime we have remoulded the model using a resin master to see if this will remove some of the pitting, this will be out of moulding today so I will be in a better position to inform you later what the current state of play is regarding a replacement body.

I appreciate the prompt and direct communication by Blitzkrieg and the degree of willing accountability and problem solving at work at all levels. I must confess, however, that personally I’m a bit disappointed that my 250/1 Alte made it through quality control at all. I pushed back the publication date of this post several times waiting for a replacement to arrive. In the meantime, I’ve gone ahead and built and painted all three models but my experience as a paying customer – not a ‘courtesy copy’ reviewer – was diminished. I’ll edit this entry post-publication if and when the replacement arrives so that as complete and fair an account as possible is provided. Watch this space.

EDIT January 12/2018: I have received a much improved casting of the Alte direct from Blitzkrieg at no charge. The detail is much crisper so I’d say there’s a solid mould in the production line. Order with confidence! The replacement, however, will never see the table except, perhaps, as a terrain piece as I was sent the body only. I had gone ahead and built (with a lot of superglue!) and painted the first flawed one I got because I needed it for a game. The new one sure looks pretty though…

The resin was easy to trim and sand but sharp and solid enough to stand up to some rough handling and keep its detail. You only really know about the true quality of resin a year down the road. Inferior resin can continue to ooze chemicals long after they are painted and cause paint to lift. For the moment, however, these took a base coat of Tamiya primer and Vallejo Model Air DAK colours admirably, and still look good a full three weeks later.

The final result speaks for itself. These are excellent models and any errors in painting or markings are mine alone. Even the offending Alte looks the business from two feet away and, in the final analysis, based on my experience with the models themselves and with Blitzkrieg I would order from them again. 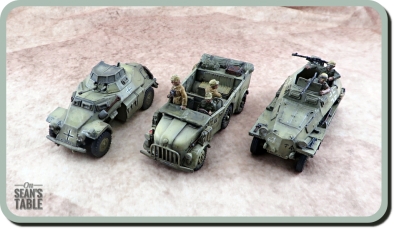 Do you have any favourite vehicles or manufacturers? Any good customer service stories to share?

← Smash Up! A game done right.
Smash Up! Munchkin & The Big Geeky Box →