Let’s continue our exploration of Smash Up by looking at the two releases that are different from the slew of regular expansions. The Big Geeky Box is a clever storage system that keeps all past and future cards in order. Smash Up: Munchkin is a stand-alone alternate starter set that features eight new factions themed around Steve Jackson’s Munchkin franchise. The Geeky Box is an automatic purchase if you like the game but Munchkin is not for everyone.

The Big Geeky Box (2014) is a highly recommended accessory. Granted, it’s only a glorified storage box but, like all Smash Up releases, is so well thought out that it’s a no-brainer to buy it. It easily stores all 55 factions from eight (and counting) expansions which allows you to take your entire collection on the road without toting multiple boxes or cards sloshing around a makeshift container. The sturdy box comes with three permanent troughs, index cards for every faction published up and until Monster Smash, and foam inserts to fill in space until you can pack every inch full of cards. People ask me,

“When are you going to stop collecting Smash Up expansions?”

When The Big Geeky Box is full of course! I figure I can get another four expansions into it so I’ll be collecting for some time to come.

There’s more to this box than just storage. It comes with a unique faction, The Geeks, who seem a bit overpowered, particularly in the hands of an experienced player. They are an excellent faction, however, to give a new player because many Geek cards are simple to understand and have an immediate and obvious impact. The bonus faction is a nice touch but it’s the sturdy and colourful faction dividers and the storage that make this a worthwhile addition to your Smash Up collection. The only downside is that fully loaded with sleeved cards the box weighs in at a full ten pounds!

The Munchkin expansion is another way beside the starter box to get into Smash Up and get enough factions for four people to play right off the bat. I’ll do a quick pros and cons list but the short version is: You have to love Munchkin and associated art work a lot to forgive the way this expansion undermines Smash Up‘s greatest strengths of brevity and constant player engagement. 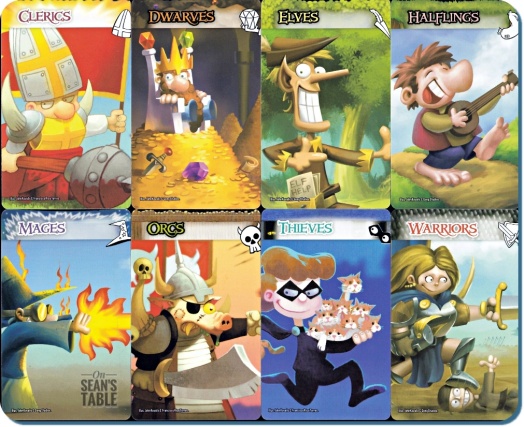 What’s Good About the Munchkin Expansion?

What’s Bad About the Munchkin Expansion?

Smash Up is fun because it’s fast and furious. Player turns should take 10 seconds at most except in the infrequent event where there is scoring to do. Munchkin greatly extends the amount of time per player turn and, in several different ways, creates frequent exercises in addition, subtraction, and accounting which are, mercifully, not in the original game.

Do you own The Big Geeky Box or Smash Up: Munchkin? Which one do you think is the more essential purchase for Smash Up fans?

3 Comments on “Smash Up! Munchkin & The Big Geeky Box”