Mansions of Madness: A Walk Through the Streets of Arkham

The first Mansions of Madness big box expansion takes us to the Streets of Arkham. New mechanics, spells, items, models, investigators, and monsters enrich and inhabit the new setting. Most importantly, the app driven game gets three new scenarios. Let’s walk through the Streets of Arkham to see if it’s worth the trip.

A Pattern Foretold in the Stars

Fantasy Flight Games continues to release their big product lines in a small box-big box cycle.  Streets of Arkham is the first big box expansion for Mansions of Madness 2015 2nd Ed. which in turn is a retooling of the Fantasy Flight Games 2011 offering by the same name. Gaming buddy Seth got me (and him) Streets for Christmas, and I’m most grateful. After splitting the orginal cost of purchasing the base game with Seth and painting all the figures, I ran right out and bought both the Suppressed Memories and Recurring Nightmares tile and figure packs as well as the small box Beyond the Threshold expansions the day after they hit my local game store. But the deeper into the mansion I get the more anxious I become…

As much as I love the game I have to admit there’s an abiding concern that’s haunted me since I got the base set. I’m undecided if I like and trust the idea that you’re dependent on the app to run the game. It simply won’t work without it. Certainly, it’s a great cooperative game and after running numerous Imperial Assault campaigns as the sole GM/baddie I’m relieved that in Mansions it’s us against the game. Also, I trust Fantasy Flight to do right by its products and players. I still have concerns, however, and they are two fold:

Look Deep into the Black Mirror

Streets of Arkham brings three much needed new scenarios to our tablets for those who have already played through all previously released material. Staring deep into our infernal machines to divine the truth, these scenarios will keep us up at night for at least five or six sessions. I won’t offer any spoilers – watching the mystery unravel along with your sanity is the best part of the game – but will conclude that they are good. Really, really good! The Streets of Arkham scenarios are a treat to explore. We even get to visit the Arkham Museum that Elder Sign fans have come to know, love, and fear. 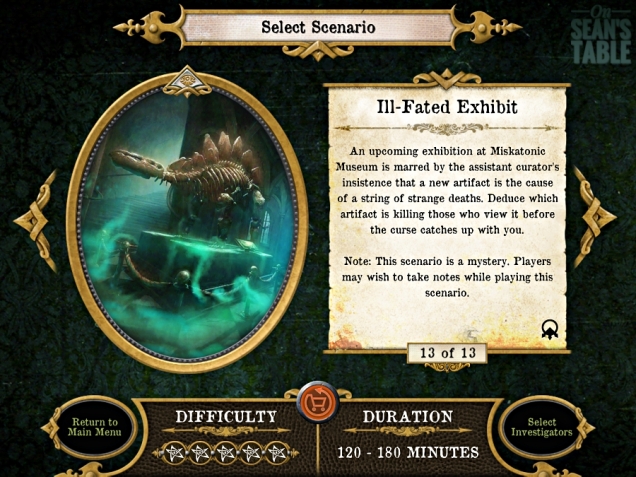 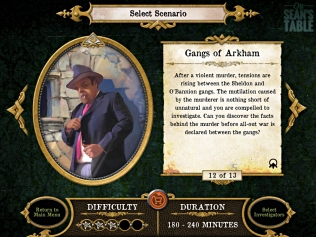 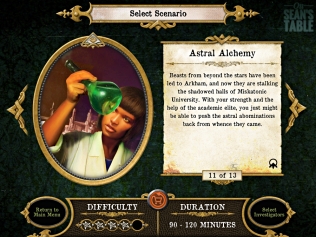 Monsters in the Streets

A moderately sized pile of grey plastic – seven models in total – comes in the box. 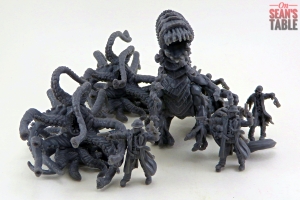 There were a few seam lines but were, overall, cleanly cast and cleaned up nicely.  After a scrubbing they took a coat of Games Workshop primer really well. I talked about the advantages of white priming in a previous Mansions post so I’ll simply reiterate that the white undercoating makes surface colours ‘pop’ more.

Before we look at the painted models, in case you want to put a face to a name, here are the monster tokens with their values and special rules and flavour text on the back.

Top number is AWARENESS for evade checks, bottom is for HORROR checks

Bottom number is BRAWN, the rest is abilities and flavour text

Here’s a rogues gallery of work in progress as well as a family photo of all the painted models together. Seriously, painting these things is enough to give you nightmares but I had a lot of fun airbrushing the three large monsters. After many long hours recently spent painting historically accurate WWII figures it is a treat to break out the colourful paints and let my imagination get carried away. 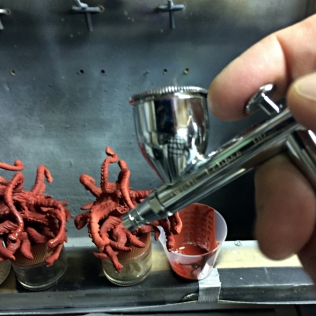 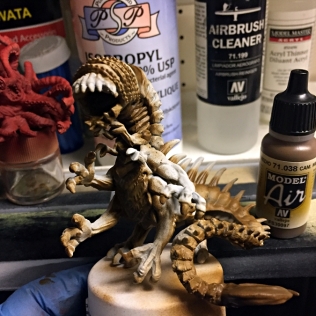 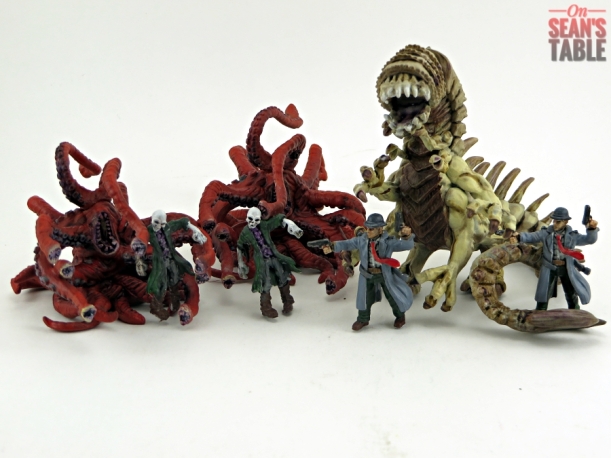 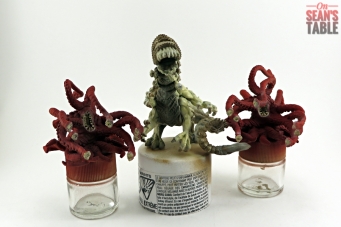 Blacklining is a technique done second last in the painting process (before a final varnish) to delineate areas and features from one another and trick the eye into seeing small shadows between details. I experimented using Vallejo Game Colour Black Wash instead of my usual thinned black paint to carefully outline and separate areas of the model. The black wash was very forgiving while remaining opaque enough to do the job. Using a clean damp brush to correct errors with painted on wash sure beats having to repaint areas if thin black paint goes astray. I’m a convert.

On the Hired Gun models below the one on the left has blacklining while the one on the right has none. It’s subtle but worth the time as I feel it really ties things together.

Who Dares Walk the Streets of Arkham?

Four new intrepid investigators dare plumb the mysteries of Arkham. They are all thematic and fun to play. The weakest special ability of the bunch is arguably that of Diana Stanley, however, she has great stats that complement the other investigators and is least likely to become insane or get wounded. The other three investigators have fantastic special abilities. 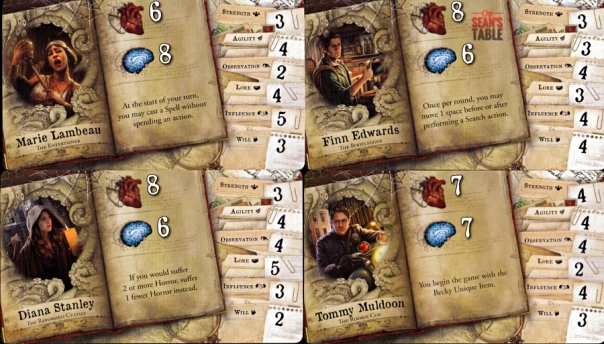 Finn Edwards is made to kick down doors and search. Tommy Muldoon is a monster hunter with Becky right from the start. Marie Lambeau is my personal favourite and makes excellent use of the new spells available in the Streets of Arkham. All investigators will also benefit greatly from elixirs that improve skills over the course of the scenario allowing you to shore up weak skills or push your best ability over the top.

While I still have serious reservations about a game that requires a tablet to play, Streets of Arkham is a welcome and thematic addition to the excellent Mansions of Madness game. Time will tell if my reservations are misplaced.

What do you think? Are you convinced that app dependant games are a positive development for board games? What games could benefit from the app treatment?

One Comment on “Mansions of Madness: A Walk Through the Streets of Arkham”