William Gibson has been accurately predicting the future for the past thirty years. His prescient mid-80s Sprawl Trilogy novels – Neuromancer, Count Zero, and Mona Lisa Overdrive – gave us a three decade early warning about the legal ramifications of sentient AI, virtual stores to accessorize virtual avatars, data mining, and corporate cyber espionage in the name of a newer, colder war. Gibson’s more recent work plays with the nearer future, more often serving up incisive interpretation of impending trends than outright predicting them. His latest work, Archangel, is a departure into the graphic novel genre and is a worthy addition to a deservedly celebrated body of existing work. Most importantly, Archangel succeeds where many film misfires have failed by at last providing a strong and enhancing visual ‘rez’ that’s vivid enough to keep up with Gibson’s storytelling.

Equal parts spy novel, time paradox sci-fi, and period-piece, Gibson mines both the near future and WWII for some real treasures. What if today’s politicians attained the ability

to create a better future by travelling back to WWII and adjusting the past? Yes, that’s what I thought too and it does indeed all go sideways, quickly. With an intricate plot that straddles the near future and iconic WWII settings, Gibson’s gift for delivering big ideas in believably human terms keeps multiple timelines and plot threads tightly woven.

Gibson has never used two words where none would do.

His prose fits perfectly into the graphic novel format. He always did have a knack for nuanced character and plot development through sparse and realistic dialogue. Again, the medium fits his message. With support from the art there’s very little narration needed and the story whistles along at a pace that almost allows us to keep up. With an “Icarus Event captured on film” as a main plot hook you’re in for a treat if you even have a passing interest in sci-fi that isn’t afraid to tell us, “Of course we’re going to do something this ambitious and misguided, and here’s what might happen. Do keep up.” That’s all I can tell you about the story without handing out spoilers.

limited series of five comic books. My copy includes an afterword by the author, reprints of the original covers, and extra art as well. I’m no art aficionado – comic related or otherwise – but I can tell you I keep going back to this book to look at all the many details in each panel. Like the story itself, the art rewards multiple readings. Easter eggs like a copy of the trail breaking Astounding Stories of Science Fiction magazine (1930 to 1960 before turning into Analog Magazine) which features Heinlein’s Hugo award-winning “If This Goes On” is seen in a drawer in one panel. There’s a good mix of atmospheric scenes that give gravity to somber moments when characters can almost see the ripples in time their actions are causing. Equally, the action scenes are a frenetic use of off kilter inset boxes and plenty of crash, bang, and whump text when everything degenerates into a good old fashion shoot out. The whole thing is a visual treat.

Easily the most exciting aspect so far has been seeing Butch [Guice] bring it to life on the page. To me, that’s actually more amazing than seeing screenplays of mine filmed, because it’s not the result of hundreds of people and umpty millions of dollars, but of the talent of one person, someone who just sits down with a pen and *does it by hand*. That continues to blow me away. – William Gibson from afterword

On a personal note, as father of a teenage daughter, I appreciate how women are portrayed: competent, not overly sexualized, and well able to hold down a central role. Yes, there’s a machine gun wielding, leather clad frauline but it’s done in good taste and, it must be said, the male body is far more on display in this book than the female. This graphic novel, like the rest of Gibson’s work, breaks more stereotypes than it perpetuates and I was excited to be able to hand it over to my kid in hopes of discussing it with her afterwards. 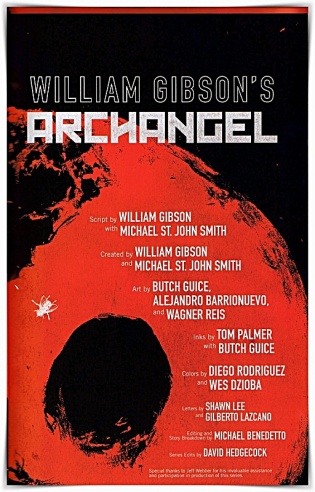 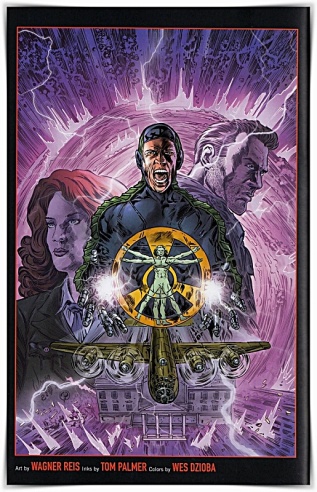 William Gibson’s Archangel has a lot to offer. If you’re at all a sci-fi, history, or comic fan you can’t go wrong with this one. Highly recommended!

Are you a William Gibson fan? Do you like the graphic novel medium? Feel free to share you thoughts in the comments below.