Building 28mm desert terrain has taken my tabletop battles from the dune filled deep desert, through the outlying mud brick houses, and finally into the centre of North African settlements like Tobruk and Benghazi. Using foamcore and styrene, let’s take a look at how to make two story North African buildings to fill in our city blocks. Your wallets be warned, this post is gadget and after market detail heavy.

END_OF_DOCUMENT_TOKEN_TO_BE_REPLACED

Art of the Brick Lego Exhibit

Lego bricks have fascinated children – big and small – since the colourful toy in its current plastic form was introduced in 1947.  The pre-cursor wooden version was created in Denmark in 1932. LEGO, derived from the Danish phrase “leg godt” or play well, has transcended its original form to become a legit artistic medium for kids and adults alike. Take a walk with me through The Art of the Brick exhibit at the Canadian Science and Technology Museum and you’ll see what I mean.

END_OF_DOCUMENT_TOKEN_TO_BE_REPLACED

This was year 16 for the Games Club I run at my high school. It reflected the trend in the larger gaming community: numbers were up overall, girls attended almost as much as boys, and the preferred type of game shifted decidedly from cardboard, dice, and counter to games focussed on more social interaction.

END_OF_DOCUMENT_TOKEN_TO_BE_REPLACED

Henry Hyde’s Battlegames Patreon campaign continues to deliver excellent editorial and strategy pieces. I’m very pleased to have contributed another terrain making guest post for Henry to highlight the scenery aspect of our hobby. You can find the African Well Tutorial here. For visitors from Henry’s Battlegames website: Welcome! Below the break you’ll find a few posts that will be of interest to wargamers.

END_OF_DOCUMENT_TOKEN_TO_BE_REPLACED

What a Tanker: Full Metal Dashboards

What a Tanker! is a WWII tank combat miniatures game by Too Fat Lardies, a UK-based indie rules writing company. We (and multitudes world-wide) have played What a Tanker! a lot recently. It’s great fun! The rulebook comes with everything you need as long as you’ve got a gaming table and some miniatures to push around. Never one to leave well enough alone, however, I redesigned the dashboards to integrate the core rules and a quick reference sheet. I also magnetized the boards so that the bumps and knocks of a game didn’t rearrange the all important status tokens. Files and instructions available below the break.

END_OF_DOCUMENT_TOKEN_TO_BE_REPLACED

The Victoria Day long weekend in May brings not only the first glorious long weekend of early summer but also a really good excuse to stay inside and avoid gardening – for a couple of days anyway. Come along as we do a tour of the CanGames Convention, 2018 edition. There were some fantastic miniatures games on offer along with the usual assortment of board and RPG games. I went Friday night and Saturday and throughly enjoyed myself.

END_OF_DOCUMENT_TOKEN_TO_BE_REPLACED

This article was published originally in Wargames, Soldiers, and Strategy Magazine # 94 and can be purchased from the WSS website.  In part one, we took Renedra’s Mud Brick House from grey plastic sprues to fully primed and ready to paint. Today in part 2, we’ll finish two kits using every trick in the modeling book. To appeal to modelers of all skill levels this post includes instructions for both brush painting and airbrushing.    Let’s get our houses onto the North African and Middle Eastern battlefields!

END_OF_DOCUMENT_TOKEN_TO_BE_REPLACED

When I introduce my high school students to Google Scholar or Advanced Search, and allow them to use only web sites with the domain .edu I’m always struck by the huge change that’s occurred in ease of access to information. “When I was your age my challenge was scraping together enough sources to work with,” I tell them from the front of the classroom, “your challenge is recognizing quality information amidst the flood of digital clutter.” Another key message is, “We don’t need to be relegated to the role of savvy consumer.” There is a way we can take an active role in dictating what content makes it onto the web in the first place.

END_OF_DOCUMENT_TOKEN_TO_BE_REPLACED 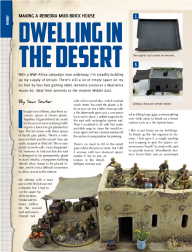 This article was originally published in Wargames, Soldiers, and Strategy Magazine #94 which can be purchased from the WSS website. This blog version is posted with kind permission from WSS.

With a WWII Africa campaign now underway I’m steadily building up my supply of terrain for the miniature battlefield. The set of walls we looked at last time have been a welcome addition to the collection but there’s still a lot of empty space on my 6 by 4 foot gaming table. The British company Renedra produces plastic model kits for just about every era. Of particular interest currently is their versatile Mud Brick House kit. From WWII North Africa to the modern Middle East the kit and accessory set are a quick and easy way to bulk out a terrain collection. Let’s have a look at Renedra’s Mud Brick House and how to convert it for maximum versatility.

END_OF_DOCUMENT_TOKEN_TO_BE_REPLACED

William Gibson has been accurately predicting the future for the past thirty years. His prescient mid-80s Sprawl Trilogy novels – Neuromancer, Count Zero, and Mona Lisa Overdrive – gave us a three decade early warning about the legal ramifications of sentient AI, virtual stores to accessorize virtual avatars, data mining, and corporate cyber espionage in the name of a newer, colder war. Gibson’s more recent work plays with the nearer future, more often serving up incisive interpretation of impending trends than outright predicting them. His latest work, Archangel, is a departure into the graphic novel genre and is a worthy addition to a deservedly celebrated body of existing work. Most importantly, Archangel succeeds where many film misfires have failed by at last providing a strong and enhancing visual ‘rez’ that’s vivid enough to keep up with Gibson’s storytelling.

END_OF_DOCUMENT_TOKEN_TO_BE_REPLACED

A futile fight against entropy or 'Every man should have a hobby'? Either way it is a blog on tabletop wargames, board games and megagames

Wargaming blog - covering real and imaginary adventures in many scales.

All about my Micro Armor miniatures

Haiku out of Africa

The Esoteric Order of Gamers
The WordPress.com Blog

The latest news on WordPress.com and the WordPress community.

Board and card gaming with a Louisiana flavor.

A blog about board games, board game strategy, miniature games, and tabletop RPGs. Love the Game.

Daily news, reviews and information for tabletop gamers of all interests.

Life In The Past Lane...